Where what happening in the world, Economy and financial latest analysis. 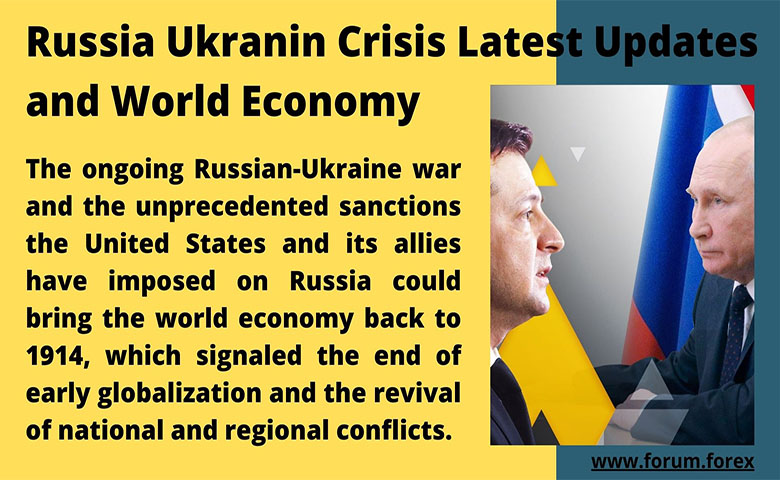 Russia could begin the next phase of its military campaign in Ukraine as soon as this weekend or early next week, according to two senior U.S. defense officials, and Ukraine is rapidly running through artillery rounds.

The officials, whose briefing was given under the condition of anonymity, said that the U.S. is working to convince allies to send more artillery and ammunition to Ukraine so it doesn’t run out when the offensive ramps up. A U.S. assessment said this could happen in the coming days, they added.

It came after explosions rocked the outskirts of Ukraine's capital, Kyiv, early Saturday. One person was killed and several people were injured in the strike on the Darnytskyi district, Vitali Klitschko, mayor of Kyiv, told Ukrainian television. NBC News has not been able to verify this claim.

The ongoing Russian-Ukraine war and the unprecedented sanctions the United States and its allies have imposed on Russia could bring the world economy back to 1914, which signaled the end of early globalization and the revival of national and regional conflicts.

At the turn of the 20th century, capitalism was on track to conquer the global economy, creating a global market without borders, a trade regime where commodities and resources could flow freely within and across borders. But unfortunately for the world community, it didn't happen.

By the beginning of the second decade, this trend of early globalization stalled and, in some cases, forestalled by the rise of nationalism and trade protectionism, not to mention the destruction of the two World Wars. For instance, increased trade protectionism limited the flow of resources and commodities across national borders. Before 2014, France and Germany had already raised trade barriers, which made imports prohibitively expensive.

That's a stark warning for world leaders. They should take it seriously if they don't want to repeat what followed after the breakdown in global cooperation before 1914.

Elsewhere, Wall Street closed lower on Thursday at the end of a holiday-shortened week as bond yields resumed their uphill climb, and investors contended with mixed earnings and economic data.

All three major US stock indices posted weekly losses ahead of the Good Friday holiday.

While all four beat Wall Street estimates, they also reported steep profit declines. Their share price reaction was mixed, and were last moving in the range of up 1.6 percent (Citigroup) to down by 4.5 percent (Wells Fargo). The broader S&P 500 Finance index fell 1 percent.

You should join this forex trading forum for getting latest forex signals, currency trading analysis and world economical updates.

Growth in the world’s second-largest economy was already slowing in the latter half of last year with a property market slump and regulatory crackdowns, leading policymakers to set their lowest annual GDP target in decades for 2022.

But analysts told AFP the figure of 5.5 per cent would be tough to achieve with stay-at-home orders halting production and stunting consumer spending in key cities.

Experts from 12 financial institutions polled by AFP forecast GDP growth of 5.0 per cent for the full year.

They expect a figure of 4.3 per cent for the first quarter, just above the 4.0 per cent recorded in the three months prior.

Elsewhere, As federal officials weigh efforts to fight the climate crisis against pressure to bring down high gasoline prices, the interior department is moving forward with the first onshore sales of public oil and natural gas drilling leases under Joe Biden.​

The move also calls for a sharp increase in royalty rates for companies, ostensibly to limit global emissions driving the climate crisis, though economists say the effect will be relatively small.

The royalty rate for new leases will increase to 18.75% from 12.5%. That’s a 50% jump and marks the first increase to royalties for the federal government since they were imposed in the 1920s.

Biden suspended new leasing just a week after taking office in January 2021. A federal judge in Louisiana ordered the sales to resume, saying interior officials had offered no “rational explanation” for canceling them.

You can learn more about world economical news and financial updates at forum.forex

If Germany joined an energy embargo against Russia, its economy could be significantly weakened, says a monthly report published by Germany's central bank Deutsche Bundesbank.

In an intensified crisis scenario, Germany's real gross domestic product (GDP) would decline by just under two per cent in the current year compared with 2021, according to the report, which analyses the possible macroeconomic consequences of an escalation of the Russia-Ukraine conflict, Xinhua news agency reported.

In this case, Germany's real GDP could, over the short term, be up to five per cent lower than expected in the European Central Bank's (ECB) March forecast, the report found.

Inflation would also "once again surge considerably," the report noted.

Moreover, A western embargo on Russian oil and gas would deal “a very serious blow” to Russian president Vladimir Putin, former oligarch Mikhail Khodorkovsky, now in exile in London, has said in an interview with the BBC’s Hardtalk programme.​

When asked whether western sanctions of Russian oligarchs would make any difference he said,

It is important to understand that right now the correct steps are being made but they are based on incorrect assumptions ... oligarchs are people who have the power to play a role in the political decision-making process. These people are not oligarchs in that sense. I was never one. They are Putin’s agents and he uses them to influence, or at least try to influence, the western political system.

On the other hand, Ukrainian President Volodymyr Zelenskiy warned that Russia's invasion of his country was just the beginning and that Moscow has designs on capturing other countries, after a Russian general said it wants full control over southern Ukraine.

"All the nations that, like us, believe in the victory of life over death must fight with us. They must help us, because we are the first in line. And who will come next?" Zelenskiy said in a video address late on Friday.

For getting latest financial news and currency trading updates, you should join this forex trading forum.

Elsewhere, Stocks plunged on Friday, with the Dow Jones Industrial Average suffering its worst one-day loss since the throes of the pandemic, as the latest raft of corporate earnings and the prospect of rising rates spurred a wave of selling.

UnitedHealth fell more than 3%, shaving more than 100 points off the Dow. Caterpillar also took out nearly 100 points from the 30-stock average, dropping 6.6% on the day. Goldman Sachs, Home Depot and Visa were also big downside contributors.

Those losses put the Dow down 1.9% for the week, its fourth straight weekly decline and its ninth losing week of the last 11. The S&P 500 posted a 2.8% weekly loss, marking its third straight one-week decline. The Nasdaq was the laggard this week, losing 3.8%.

On the other hand, Economic growth is slowing in large parts of the globe as businesses struggle to navigate the effects of Russia’s invasion of Ukraine, pandemic-prompted lockdowns in China and high inflation.​

Surveys of purchasing managers conducted over recent weeks indicate a loss of steam in major economies such as Germany, the U.S. and the U.K. in April.

You can get daily world economical latest updates at forum.forex 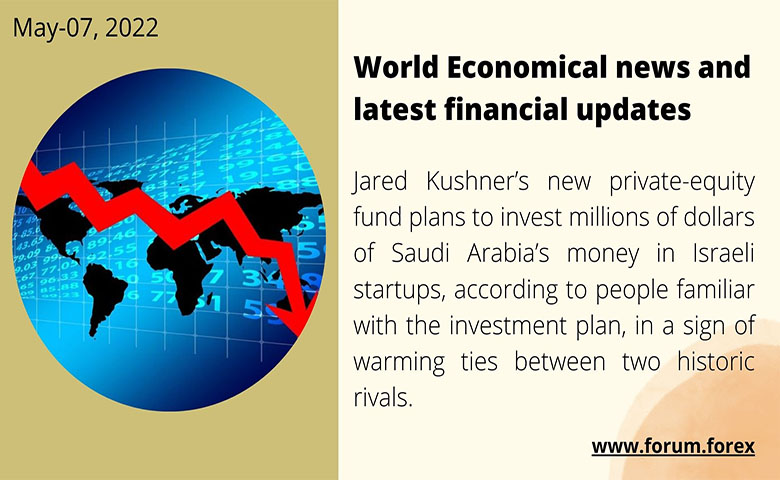 Ukrainian forces are seen pursuing a counteroffensive near the northeast Kharkiv region. The U.S.-based Institute for the Study of War says the operation could soon free Kharkiv from the artillery range of Russian forces.​

Russia’s Defense Ministry has reportedly claimed to have destroyed a large stockpile of military equipment from the U.S. and European countries in the Kharkiv region.

A dress rehearsal for Russia’s annual “Victory Day” is underway on Saturday. May 9 will mark the anniversary of the then-Soviet Union’s defeat of Nazi Germany in World War II.

On the other hand, Jared Kushner’s new private-equity fund plans to invest millions of dollars of Saudi Arabia’s money in Israeli startups, according to people familiar with the investment plan, in a sign of warming ties between two historic rivals.

Affinity Partners, which has raised more than $3 billion, including a $2 billion commitment from the kingdom’s sovereign-wealth fund, has already selected the first two Israeli firms to invest in, these people said.

Elsewhere, The bank of England has increased its main interest rate to 1 percent. It is forecasting inflation of 10 percent this year, driven by soaring energy costs and the rising price of goods. Millions of people are facing a miserable, grinding year as the prices of essentials accelerate far past pay, pensions, or benefits increases. Interest rate rises will do nothing to alter this; more likely, they will simply add to the squeeze of those already in debt — levels of which have also started to rise sharply since the start of the year. And as prices and interest payments rise, spending outside of essentials will fall further, helping tip the economy into a recession.

For some, this will mean being pushed into outright poverty, with the Resolution Foundation think tank forecasting 1.3 million more people forced into absolute poverty over the next twelve months. Reports are already coming in of pensioners skipping meals to cover their heating costs. For those above the poverty line, it will mean a year or more of never quite having enough money — of clawing back on spending outside of the essentials.

The companies are in detailed discussions about an all-share tie-up that could be announced within weeks, the report said.

You can learn more about forex trading skill and daily latest world economical news at forum.forex