Staff member
Analysts tend to be concerned about the persistence of unemployment from earlier closures and restrictions and the economic impact of the reversals of easing which have been imposed in several states.

The difference between success and failure in Forex trading is very likely to depend mostly upon which currency pairs you choose to trade each week, and not on the exact trading methods you might use to determine trade entries and exits. The current market environment has changed from one of crisis to a questionable rebound or recovery, despite the continuing growth in the coronavirus pandemic which is still sweeping the world.

In my previous piece last week, I saw the most attractive trade set-ups as likely to be long of the EUR/USD currency pair following a New York close above 1.1876. There was no close above that level, so there was no trade this week.

Fundamental Analysis & Market Sentiment
The economic impact of the coronavirus pandemic seems to be transferring income streams from smaller to larger businesses and boosting the profitability of large tech companies.

The market’s focus now is centered on the political dispute in the U.S.A. over the terms of additional fiscal stimulus which the U.S. economy is seen to require as the U.S. economic recovery is endangered by the resurgent coronavirus. This is echoed in other countries around the world, with markets watching to see how effectively local economies bounce back from the initial part of the crisis.

Possibly the second major issue now is progress being made in a number of channels towards a safe and effective coronavirus vaccine. If such a vaccine is credibly confirmed, this can be expected to boost global economic optimism.

Last week saw the number of daily new confirmed coronavirus cases fall to its lowest level in five weeks. This is a sign that globally, this wave of the disease may have already peaked.

We have seen the epicenter of the global coronavirus pandemic move into Latin America, although the U.S.A. and Brazil are recording approximately the same number of daily deaths from the virus. The number of new cases in the U.S.A. has declined notably in recent days. The rolling averages of deaths have decreased significantly in Europe. Globally, coronavirus deaths are still lower than they were during their peak in early April, suggesting the virus may have become less lethal, or medical systems are improving their treatment capacities.

The U.S. stock market rose again by a little last week to make its highest all-time weekly close. Typically, such new all-time highs tend to produce further rises of 8% on average over the next year or so, suggesting the stock market is likely to continue to advance. Despite these high prices, analysts tend to be concerned about the persistence of unemployment from earlier closures and restrictions and the economic impact of the reversals of easing which have been imposed in several states. The market still hopes to see an additional and far-reaching stimulus package from the federal government soon, despite the current political impasse.

The U.S. Federal Reserve released minutes last week showing the bank remains very concerned about the impact of the coronavirus upon the economy, and many analysts saw the release as dovish for the U.S. Dollar. However, the U.S. Dollar Index ended last week almost unchanged in value.

The European economic recovery still seems to be in relatively good shape although there are signs that the coronavirus is growing again in some countries, especially France and the Netherlands. Nevertheless, this macro environment has helped to boost the Euro.

There is an increased feeling that the Eurozone economy may be better placed to recover from the economic impact of the coronavirus than the U.S. economy, which has helped boost the Euro against the U.S. Dollar. The Canadian Dollar has also been strong, boosted by the recovery of the price of Crude Oil as a major oil producer.

The coming week will bring almost no important releases concerning major currencies: as we are now well into August, which is traditionally a holiday season in much of the world, we can probably expect a relatively quiet market this week.

Technical Analysis
U.S. Dollar Index
The weekly price chart below shows last week printed a relatively small but bullish pin candlestick at a new 2-year low closing price. The high of the week’s range rejected the resistance level I identified at 12087 which is a bearish sign. However, the pin candlestick in combination with the previous week’s inside candlestick is a bullish sign. There is a long-term bearish trend, as the price is lower than it was both 3 and 6 months ago. Overall, next week’s price movement in the U.S. Dollar looks very uncertain.


S&P 500 Index
Last week printed a small bullish candlestick, which closed right at a new all-time high weekly closing price. This is a bullish sign and usually new all-time highs signal that the price is going to rise further over the coming weeks and months. However, bulls should be worried about the low volatility and volume, and we may well see a strong dip from this area before there is a further rise over the long-term.

USD/CAD
The Canadian Dollar is in a long-term bullish trend and rose again last week against the U.S. Dollar, as part of the long-term the bearish trend we see here in this currency pair. The “Loonie” is currently one of the strongest major currencies, but bears should probably be wary of the key support at and below the major psychological level at the round number of 1.3000.

USD/TRY
The Turkish Lira has been in a long-term decline but pulled back a little over the past week. Despite its increase, it remains vulnerable to further losses against the U.S. Dollar. Trading this pair long can be challenging due to high spreads and a very high overnight financing fee, but it is definitely a trade based upon strong fundamental factors. It is important to use a good stop-loss methodology as volatility can be very high and drops extremely sharp.

Bottom Line
I see the most attractive trade set-up for this week as likely to be long of the S&P 500 Index.

Trading is not a place for gambling. Trading is a business. Where many people are making money and being successful. If you want to make a profit in trading, you have to learn first. If you don't learn, then you will face loss. There is a lot to learn in trading. You need to know a lot of things like how to do technical analysis, how to do money management, how to set up risk management and do a lot of research on trading.
As a beginner trader, you need to know about these various things. I learned all the basics of forex from the demo account of TP Global FX. They are very helpful and supportive. I am very pleased with their services.

Usd/Cad: in an hourly chart dollar is losing some prices and if the gross domestic product news goes negative then it might go more down and the next support will be the 1.2950 level.

GBP/USD: If we take a look at the hourly chart then we will see a massive uptrend as a few hours back it went too much downtrend but from the last hour it's just raising its price where the price level is 1.3352.

GBP/USD: If we take a look at the hourly chart then we will see a massive uptrend as a few hours back it went too much downtrend but from the last hour it's just raising its price where the price level is 1.3352.
Click to expand...

Eur/Jpy: In an hour chart EUR is going for a downtrend while the price range is 124.16 so if the upcoming dollar news is going good then the euro will go more down so investors are only looking for the next news.

EUR/USD was very much bullish throughout the week and is highly likely to continue in same format ahead too. It will be interesting how it all goes, but the bulls are likely to be heavy this week as well, which will enable good working.

GBP/USD was very much bullish during the week, so it is a good opportunity for us to go for buy here with the dip we have seen. But it is must that all is done through the right level of risk/money management to be able to gain most out of.

USD/JPY was bearish during the week but we did saw a reasonable pickup, it was a very much expected scenario, so it will be good opportunity for us to go for buy but we must be very careful with how we go about approaching each and everything.

EUR/JPY was very much steady during the past few days before closing. However, the early day of the week saw massive jump and that pushed it 200 pips above, it is highly likely that we will continue witnessing same level of happening ahead too, so it is good time to go for buy on dips. 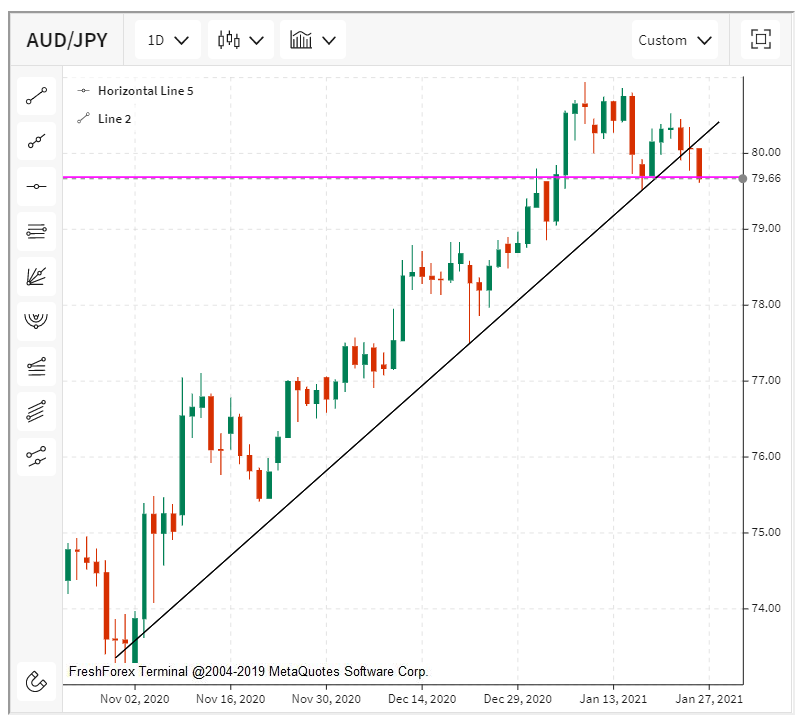 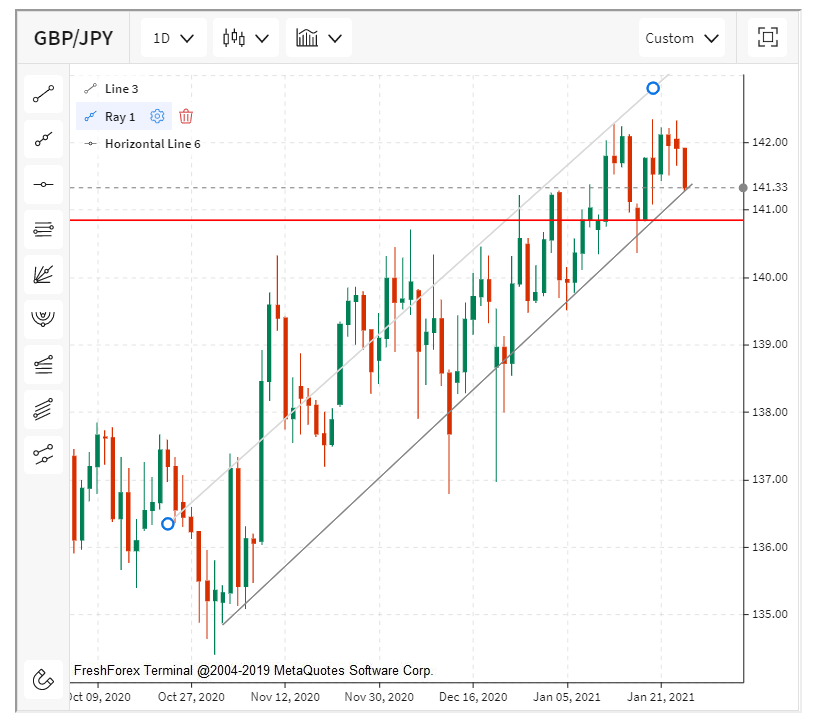 GBP/JPY has a long term uptrend from Oct 2020 and keeps continuing. I do not find any issues here yet, Though it lost a small value in the last few days still it is good to go and time to invest until it crosses the 140.85 level. If it crosses its important to support that is 140.85 then it may get a big downtrend. 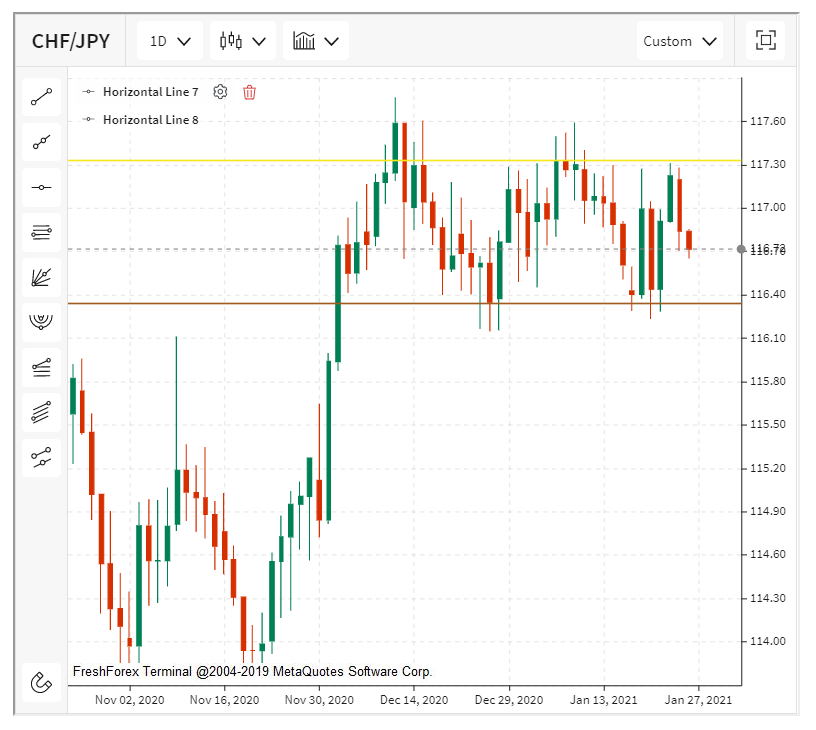 CHF/JPY is set for a sidewise trend after a quick uptrend, this scenario is a charming one to invest in for a short time period. It recently came back from a strong resistance level of 117.3 and is moving to a real strong support level of 116.30. I hope it will come back from this support level for sure. 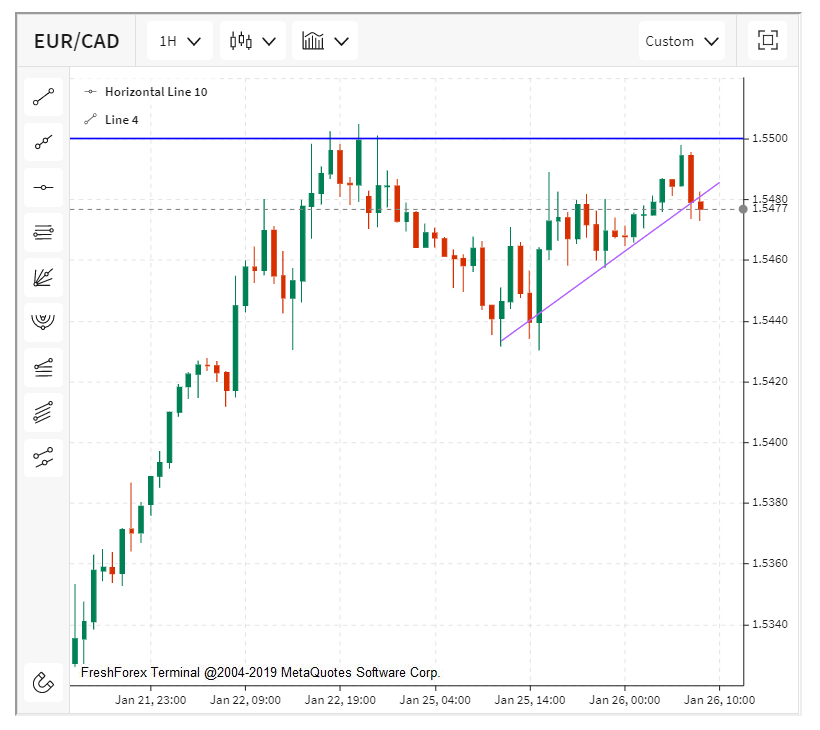 EUR/CAD got a quick and fast uptrend recently and is having a small downtrend on an hourly basis. It breaks its small uptrend and back from its strongest resistance level. It seems to go back to the next support level to 1.5460 or worst scenario 1.5440. 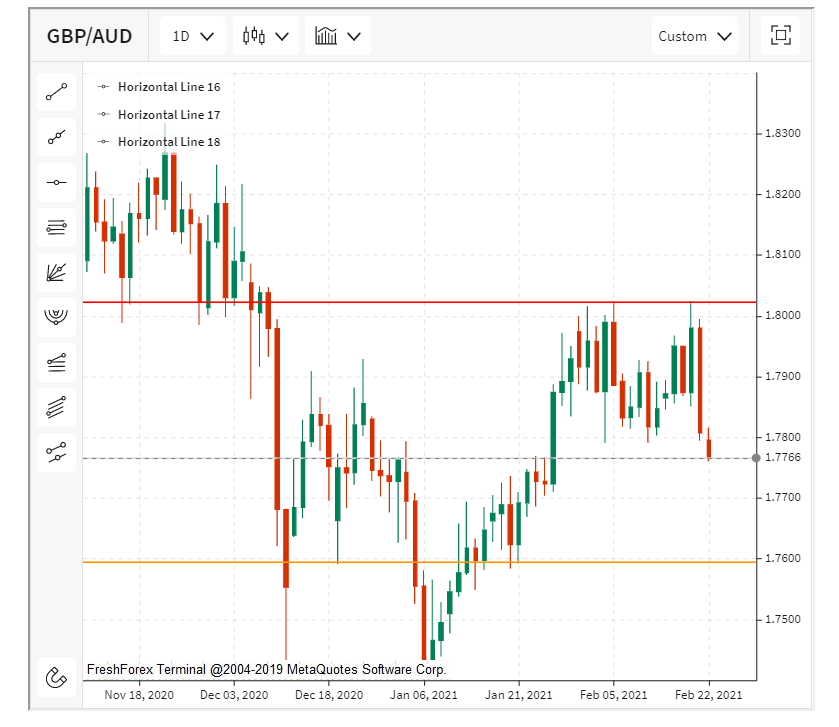 GBP/AUD is having a mid term uptrend recently but it lost it strength and could not overcome the strong resistance at 1.8050. Therefore it is coming back to its resistance, there is a big chance to come back to 1.7600. 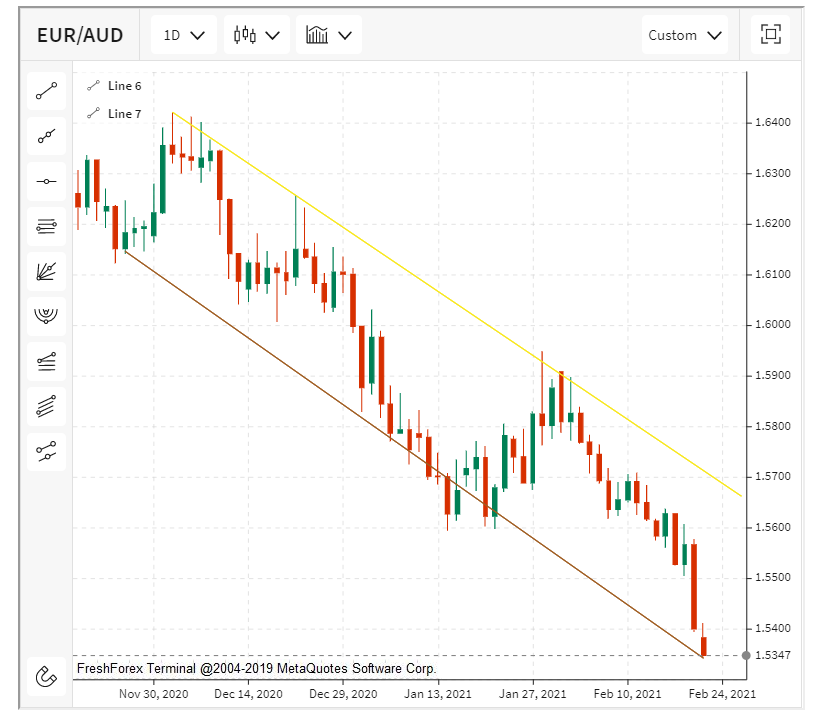 EUR/AUD is on the long downtrend that started from October, 2020 and still continues. It created strong support at 1.5600 recently but failed to retain it and went further down at 1.5374. It is ideal to watch for a little while until it crosses 1.5900. 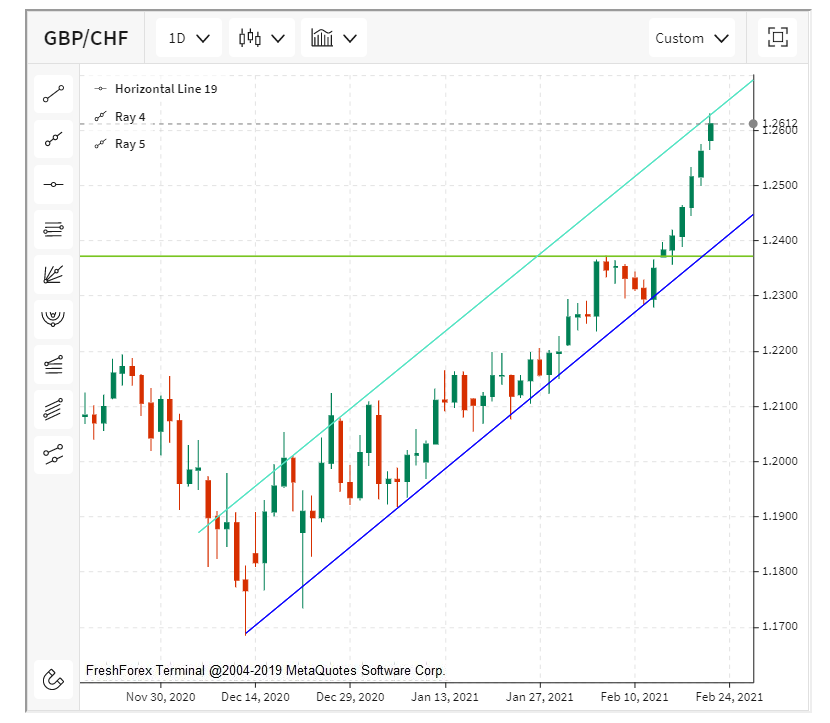 GBP/CHF is in a great position right now. It keeps breaking the past resistance and keeps going with full powers. Buyer is more positive here. So, it's time to invest and enjoy the show. 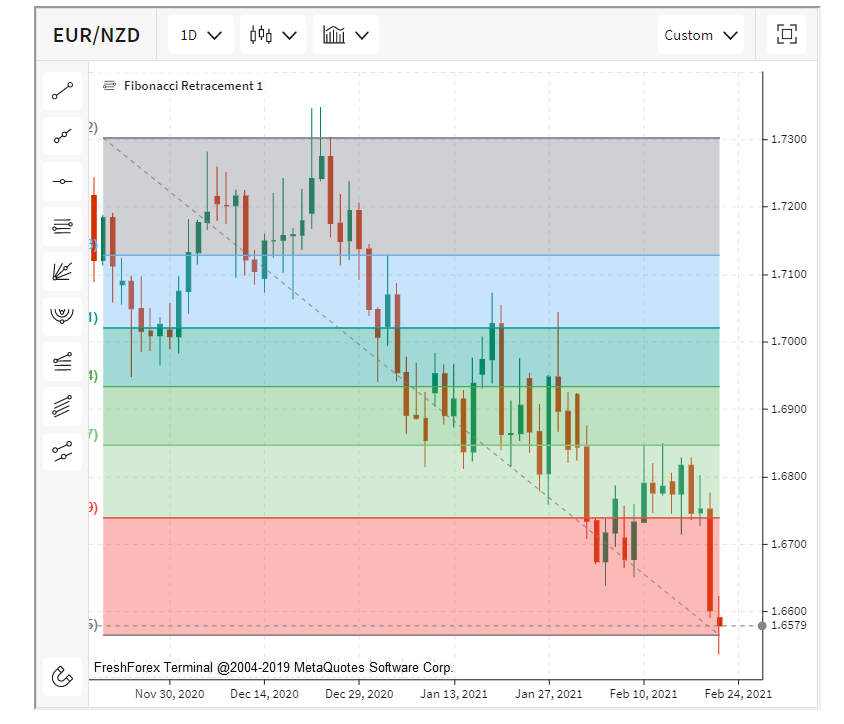 EUR/NZD is acting as a falling knife because it crosses all the recent support levels. It is best for us to watch carefully and wait until it reverses the price and back to 1.6970 again. It will not be a wise decision to catch a falling knife. But if you want to do some short sales then it is a great chance for you. 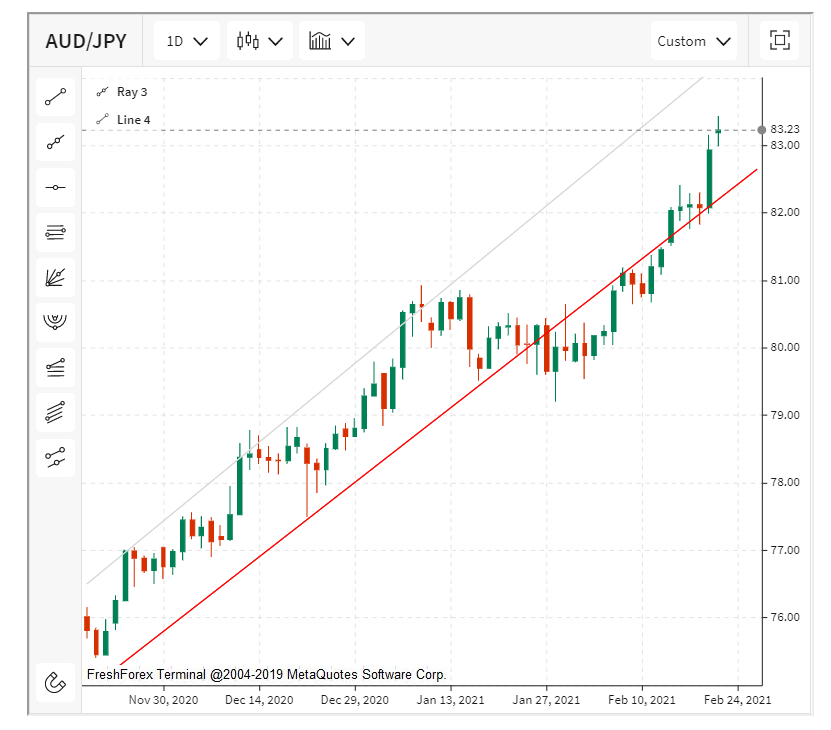 AUD/JPY is at the edge of long term uptrend and getting more power to go further from the next resistance level from 83.00. It just crossed the height resistance level and kept going. This is a wonderful chance to watch and time to invest for more return.
You must log in or register to reply here.