Quotes of stock indicators took advantage of the slowdown in the bond market and continue to grow after the publication of positive corporate reports. According to financial company Refinitiv Lipper, the average value of shares of US funds increased by 8.7% in October, which served as a catalyst for the DJIA quotes to strengthen by 14.0% during the month. 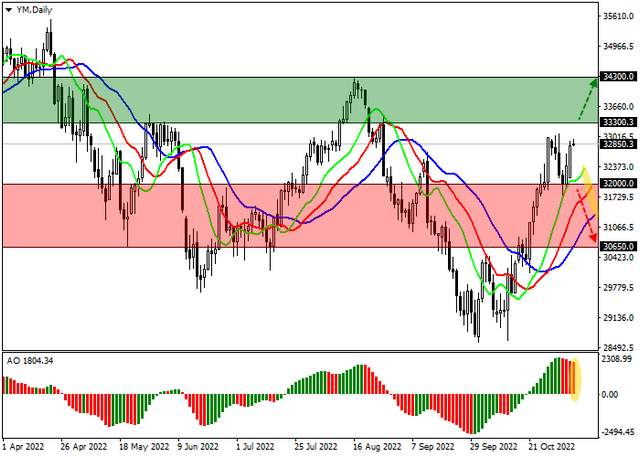 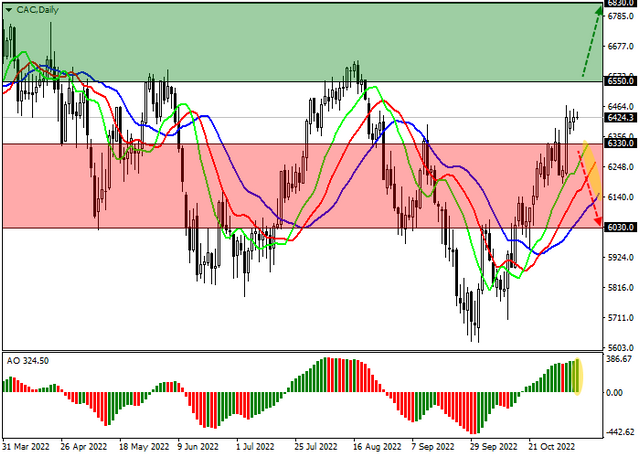 On the daily chart of the asset, quotes continue to trade within the descending corridor, approaching the resistance line.

The American market significantly slowed down the dynamics in anticipation of the results of the Midterm elections to the US Congress, as well as data on inflation. The S&P 500 is currently correcting, trading at 3759.

Based on the interim results of the voting, it is quite likely that different parties will control the Senate and the House of Representatives, which will create a so-called "political impasse". This may mean that the adoption of new legislative initiatives will be difficult, and, therefore, the likelihood of the final adoption of a bill to raise corporate taxes may be reduced, which is a positive signal for the stock market. The index quotes continued the local corrective trend, more and more clearly forming the Flag pattern on the daily chart.

As of the end of yesterday's trading, 1.0 thousand cubic meters of "blue fuel" on the London Intercontinental Exchange (ICE) was traded at a price of 1.245 thousand dollars. The spot price for gas with a next day delivery is at around 0.716 thousand dollars per 1.0 thousand cubic meters, which cannot be compared with the spring peak prices of 3.8 thousand dollars. The main reasons for the decline in quotations are the high filling levels of European gas storage facilities, which are approaching 99%, as well as abnormally warm weather in the EU for the current time of the year. 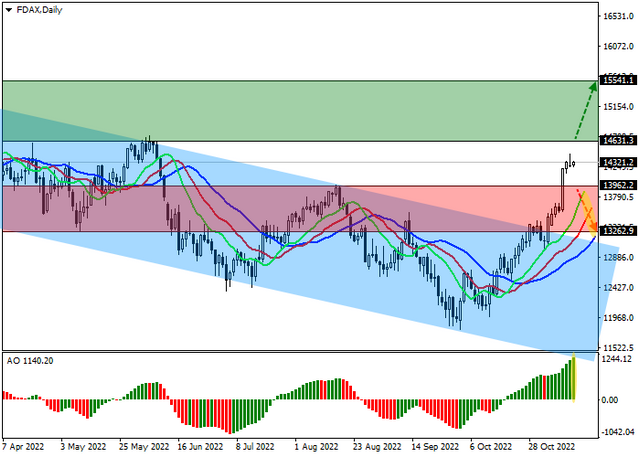 On the daily chart of the asset, the price is trading above the resistance line of the descending channel, actively rising and reaching the highs of this spring.

Quotes of US stock indicators slowed their growth against the background of ambiguous rhetoric of officials of regional Federal Reserve Banks (FRB) regarding further prospects for raising interest rates. Thus, the head of the St. Louis Fed, James Bullard, noted that the regulator needs to continue the "hawkish" course, since the current interest rate level does not limit economic activity sufficiently. In his opinion, the target level of the value may range from 5% to 7%, however, if inflation in the USA slows down in the coming months and quarters, the US Fed will not have to tighten monetary policy as sharply as expected at the moment. 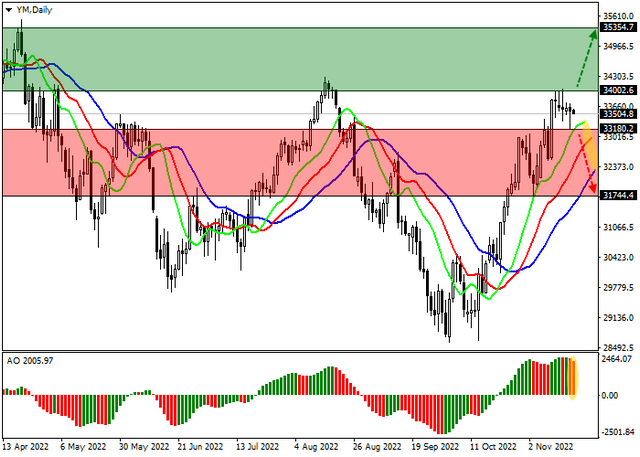 On the daily chart, the index quotes continue their corrective dynamics and increase, reaching a local maximum in early August at around 34000.

The focus of investors' attention continues to be companies associated with Elon Musk, and now the negative background has shifted from Twitter Inc. to Tesla Inc. Thus, the manufacturer of electric cars announced that it was recalling a batch of 321.0K popular Model 3 and Model Y automobiles in the USA due to a defect in the taillights. This year, a similar situation is repeated for the 19th time due to imperfections of structures. Among the positive news, it is worth noting the dynamics of the shares of The Walt Disney Co., which have moved to active growth against the background of news about the return to the company of Bob Iger, who left the post of executive director in 2020. 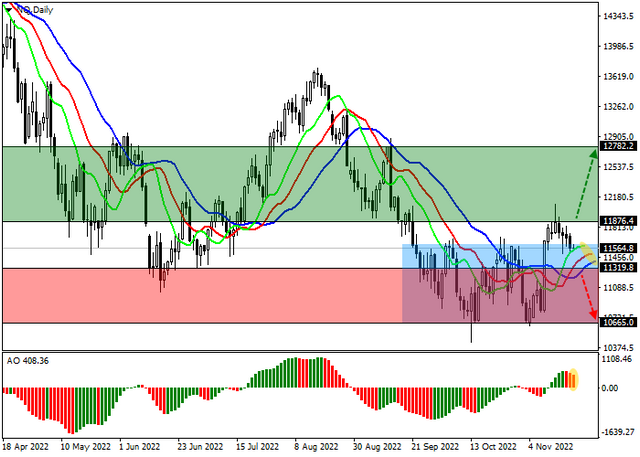 On the daily chart, the index quotes continue to attempt to exit the local side channel.

The American stock market continues to recover its positions against the backdrop of positive signals from the US Federal Reserve, which were received from the minutes of the last meeting of the monetary policy department. According to the published document, the agency acknowledges the serious uncertainty in the economy associated with high interest rates and does not rule out the start of a slowdown in the pace of their adjustment to assess the effect on the economy from the steps already taken. Also, the previous level of stability of the value was revised upwards, and this gives the market a signal that the rate will change next year as well. Thus, analysts confirmed their confidence in the continued tightening of monetary stimulus by the US Federal Reserve, but at the December meeting, they expect an increase of 50,0 basis points, and not 75,0 basis points, as it was in November. 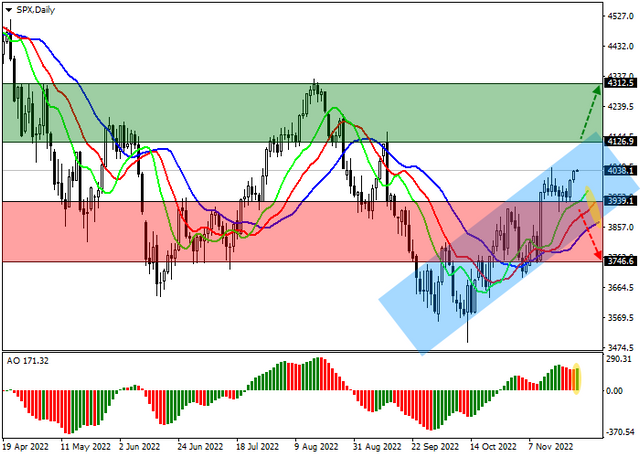 The index quotes continue the local corrective trend, and on the daily chart, they still form a Flag pattern, rising toward the resistance line, and technical indicators hold a buy signal.

French companies continue to demonstrate fairly strong financial results, despite another decline in business activity in the country: in November, the figure corrected from 103 points to 101 points against the forecast of 102.0 points. However, at the moment, the attention of investors is drawn to the statement of representatives of the automotive corporation Renault Group on the conclusion of cooperation with the energy companies Engie SA, Voltalia SA and Electricite de France SA for a 15-year supply of electricity from renewable sources, which can cover up to 50% of the needs of the automaker in the country. Recently, the issue of decarbonization of production in France has been quite acute, and reports of a deal may cause approval from the environmental community, allowing the issuer to attract additional investment. 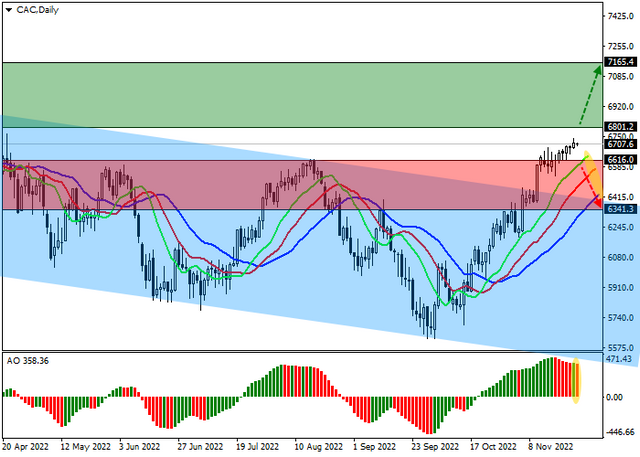 On the daily chart, CAC 40 quotes continue to trade above the resistance line of the descending corridor, and the technical indicators strengthen the buy signal. 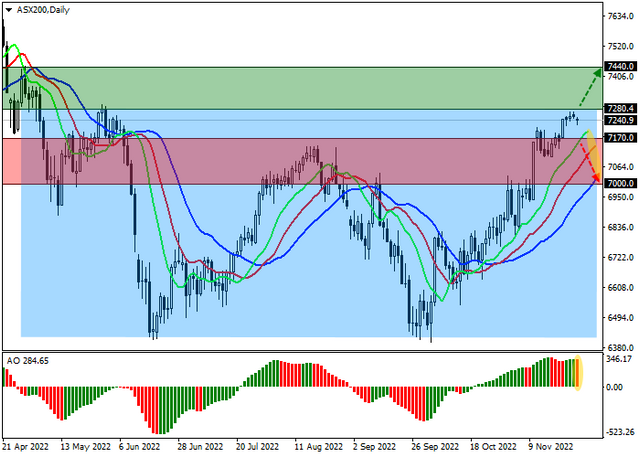 On the daily chart of the asset, the price is trading within the global side channel, having reached the resistance line the day before, and the technical indicators keep a stable buy signal.

Nasdaq 100 - The US stock market is correcting down again

At the beginning of the week, the US market traded with low volatility, but the situation began to change after a number of officials from the regional Federal Reserve Banks (FRB) spoke about the current monetary policy. Thus, the Chair of the St. Louis Fed, James Bullard, noted that the US Federal Reserve needs to keep the interest rate above 5.0% throughout the next year, and possibly even several quarters of 2024, in order to have a significant impact on inflation. This opinion was shared by the Chair of the Fed of New York, John Williams, who noted that the regulator will continue the policy of aggressively increasing the indicator and will keep it at a high level throughout the next year. 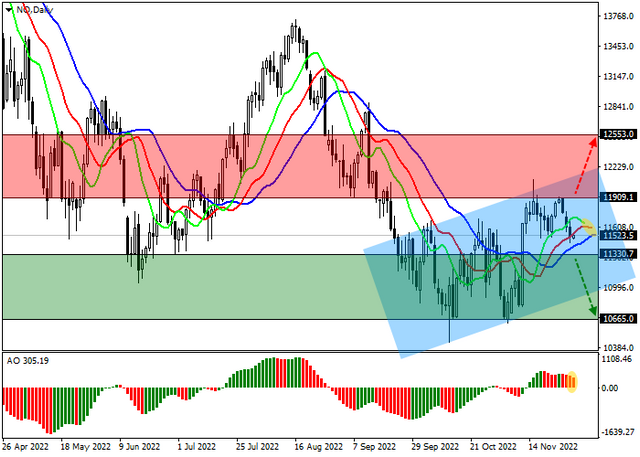 On the daily chart, the index quotes continue to trade within the local rising channel, and the technical indicators are about to reverse and give a sell signal.

DAX 40 - Correction in the bond market supports the index

After the release of extremely weak statistics on the labor market, corporate news receded into the background. The number of unemployed in Germany in November increased by 17.0 thousand after an increase of 9.0 thousand in the previous month, while analysts expected an increase of 13.0 thousand. In turn, the overall Unemployment Rate in the country corrected to 5.6% from 5.5% a month earlier. The constant increase in the number of unemployed citizens has been going on since May, which is an extremely negative signal for the country's economy. 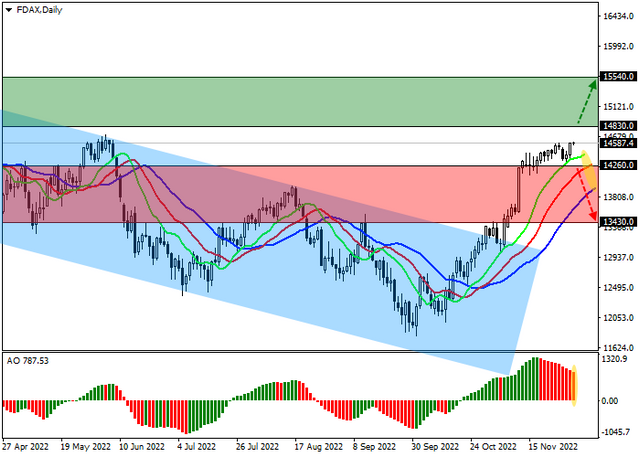 On the daily chart of the asset, the price is trading well above the descending channel resistance line, reaching highs in the late spring of this year, and the technical indicators maintain a steady buy signal.

Yesterday at 8:53 AM
Solid ECN