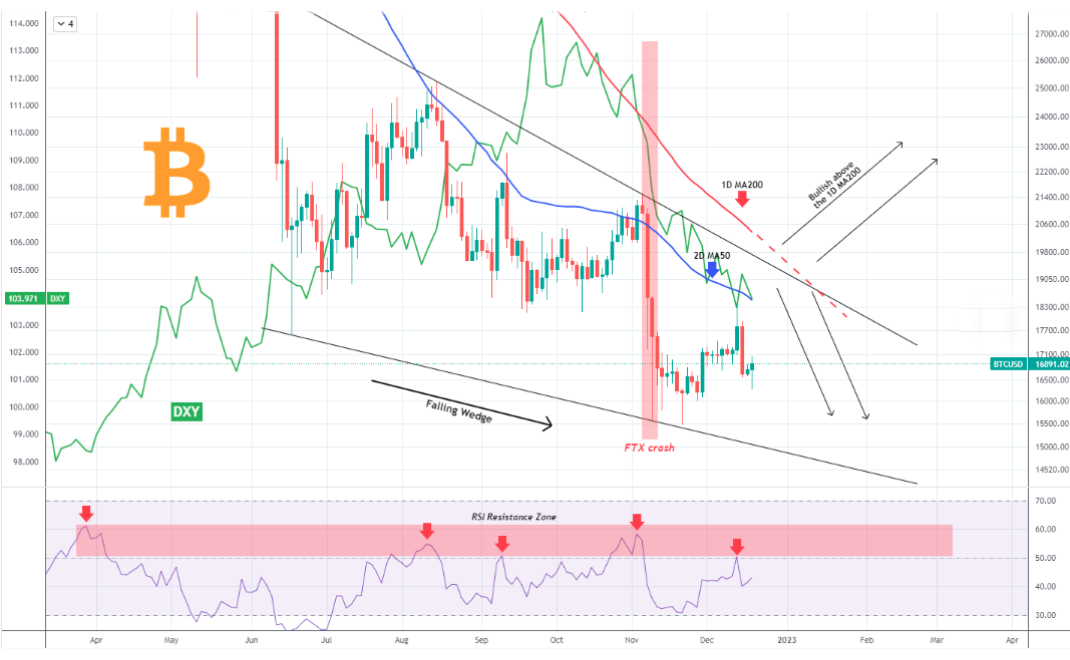 Indeed Bitcoin ( BTCUSD ) is far from being at its best shape as not onlt was it rejected last week on the 2D MA50 (blue trend-line) but the RSI did so also on a Resistance Zone holding since last March.

The pattern since the June low is a Falling Wedge and that won't seen to be able to break to the upside unless the price breaks above the 1D MA200 (red trend-line) which by the first week of January should enter the Falling Wedge . Only then, after breaking this trend-line that has been intact since December 31 2021, can we expect Bitcoin to turn bullish long-term. Until then, the top (Lower Highs trend-line) of the Falling Wedge poses as the next rejection point/ Resistance.

The only indication showing that there may be light down the tunnel for Bitcoin is the U.S. Dollar Index ( DXY ). This has been dropping significantly since September 26 and even though as you see on the chart they have a negative correlation, Bitcoin broke this after the FTX crash. With the Dollar continuing to drop, it would appear that when the crypto market gets past this fundamental effect of fear and uncertainty it left, it will shoot up aggressively to cover the lost ground to the upside.

Do you think the market is far from getting back to normal again and capitalize the Dollar drop? Feel free to let me know in the comments section below!
Trade With A Lightning Fast Platform - AssetsFX

On a positive note, the drop in the U.S. Dollar Index could potentially provide a boost for Bitcoin in the future. As you mentioned, there is a negative correlation between the two, and the ongoing drop in the dollar could lead to an aggressive surge in Bitcoin as the market moves past the current fear and uncertainty.

Thanks for sharing your analysis of the current state of the Bitcoin market. It seems like the market is facing some challenges, with the falling wedge pattern and ongoing rejection at the 2 DMA 50 and resistance zone. It'll be interesting to see if the price can break above the and turn bullish in the long term. The top of the falling wedge looks like it will continue to pose as a rejection point/resistance.It's worth keeping an eye on market volatility as we move forward. Sometimes, it can be a bit of a rollercoaster, but that's just part of the game. BTW, have you looked into the option for free bitcoin mining?
Last edited: Jan 4, 2023

I genuinely believe this will be one of the best recovery to ever cross the platform. The difference in content compared to what other agents push out really made this service exciting, unique, and fun all at the same time. Congrats dude, Bro shoutout to these guys man being consistant every day and making the start of the week alot better making banger recovery big up @Vravmo00 on IG...
You must log in or register to reply here.

S
How to understand the falling wedge and rising wedge?

S
BITCOIN The complete Cycle mapping. Will you miss out on this?