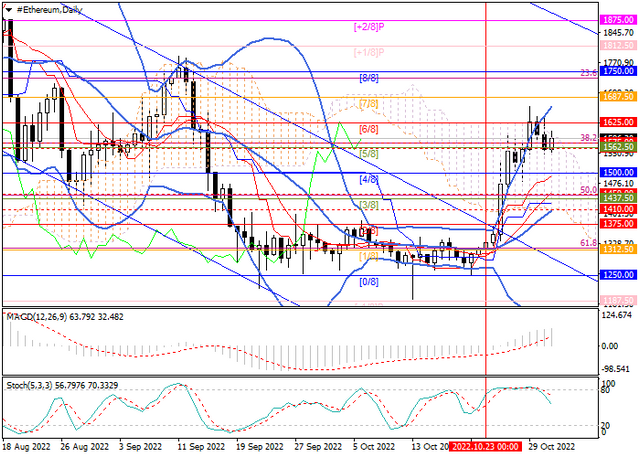 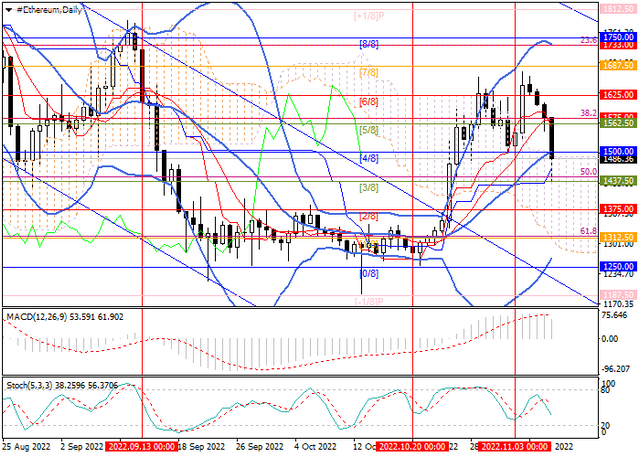 The cryptocurrency market suddenly found itself under serious pressure amid the conflict between the two largest digital platforms. At the beginning of the week, the head of Binance, Changpeng Zhao, announced the company's withdrawal from the investment agreement with FTX and the refusal to operate with its own token of this FTT exchange. This decision was caused by suspicions of overstating the balance sheet of Alameda Presearch. As a result, the FTX platform began to experience significant liquidity problems, investors began to withdraw funds, and the value of FTT sharply decreased, pulling the leading cryptocurrencies with it. After that, the management of both platforms had to realize that if the consequences of this situation were similar to the fall of the LUNA token, the entire digital asset sector would be greatly damaged, investors would lose interest in it or be wary of it, and regulators would make new efforts to limit the activities of the cryptocurrency community. As a result, Sam Bankman-Fried and Changpeng Zhao agreed to sell FTX assets to Binance exchange, which should ensure the preservation of its clients' funds. This decision, however, has not yet been able to stabilize the market and the fall in prices of leading assets continues. 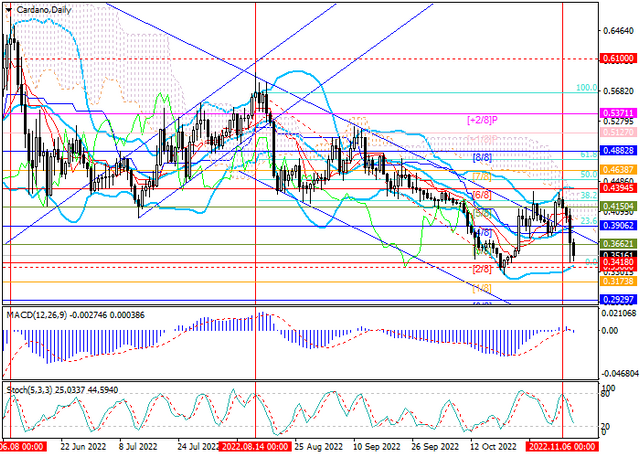 The ADAUSD pair continues to trade within the medium-term downward channel, where it returned at the beginning of this month: at the weekend, the price reached the year’s lows around 0.2945 but is currently trying to restore positions. However, the upside potential is limited by strong resistance 0.3418 (Murrey level [2/8], the middle line of Bollinger bands, the upper border of the downwards channel). 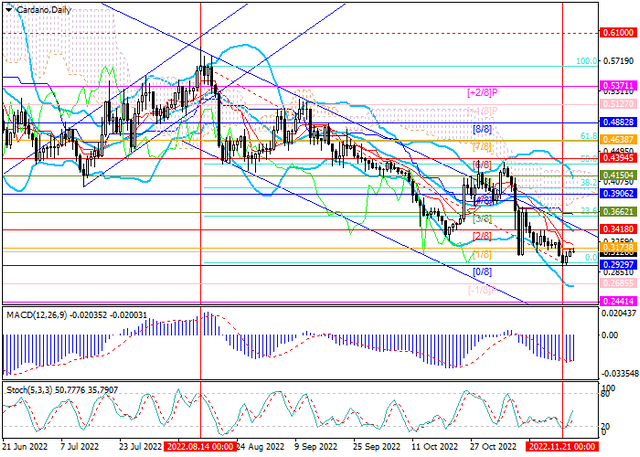 Like the rest of the cryptocurrency market, the BTC coin is experiencing the consequences of the bankruptcy of the FTX exchange, which risks causing a “domino effect” and leading to significant losses for other large companies in the digital sector. Currently, a direct consequence of this event is the loss of funds by millions of creditors and the financial problems of more than a dozen cryptocurrency platforms, including Galaxy Digital, Sequoia Capital, BlockFi, Crypto.com, and others. Investors are most wary of the current situation with a subsidiary of the Digital Currency Group: Genesis Global Capital offered investors to issue loans in cryptocurrencies at a high interest rate. This service was also used by the FTX exchange, secured by its own FTT token, and after its closure, the Digital Currency Group experienced a liquidity deficit of 1.0B dollars, which has not yet been closed. According to experts, the bankruptcy of the Digital Currency Group could have even more significant consequences for the cryptocurrency industry than the fall of FTX, as many digital enterprises will be deprived of the opportunity to raise additional capital. Community members understand this danger and are creating a fund under the auspices of the Binance exchange to support companies affected by the crisis. The total amount of funds allocated for this may reach several billion dollars, but whether they will help stabilize the market is still unknown. 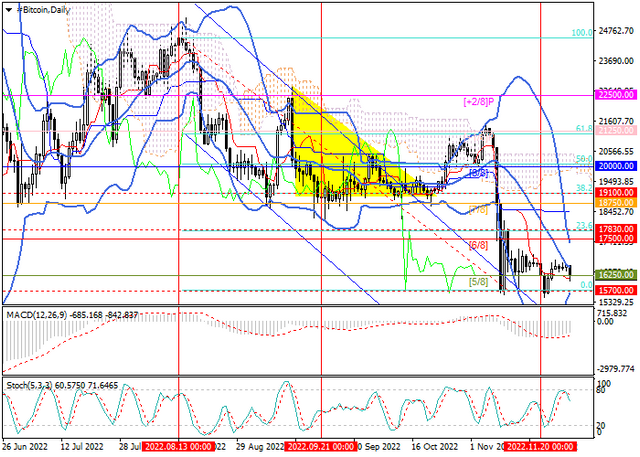 The main pressure on ETH over the past few days has been an unsuccessful joke by one of the blockchain developers with the nickname Cygaar. In an effort to assess the impact of social media posts on the crypto community, he hinted on Twitter that the ETH token would soon become insolvent. This post was supported by the heads of Tron Justin Sun and of Ethereum Vitalik Buterin. Investors took Cygaar's message as a warning, starting serious coin sales. 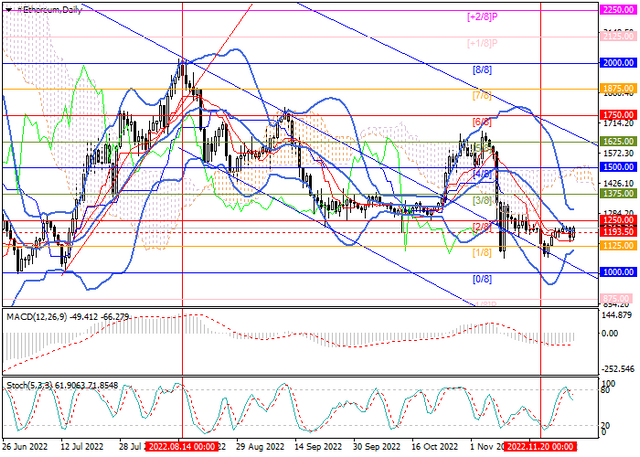 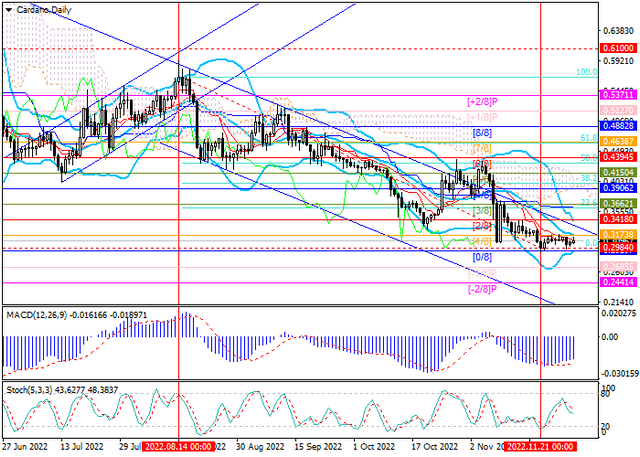 Technical indicators signal the continuation of the downward trend.

XRPUSD - The pressure on the coin remains

Currently, the instrument is under the influence of opposite factors. Thus, the weakening of the US currency contributes to the price increase on the eve of a likely slowdown in December in the pace of interest rate hikes by the US Fed. Earlier, this possibility was confirmed by the head of the American regulator Jerome Powell. Nevertheless, a significant strengthening of the positions of digital assets continues to be hindered by the negative associated with the bankruptcy of the FTX exchange. Additional pressure on XRP is exerted by the decision of Coinbase, the largest cryptocurrency platform in the United States, to discontinue support for XRP, BCH, ETC and XLM tokens by the Coinbase Wallet, which is explained by the low volumes of their use. The management of the platform assured that investors will not lose their funds, but to access them it is necessary to use another electronic wallet and go through the recovery procedure. Some experts have suggested that this decision is due to the possibility of a negative outcome for Ripple in the lawsuit filed by the US Securities and Exchange Commission (SEC) to determine the status of XRP as a security. 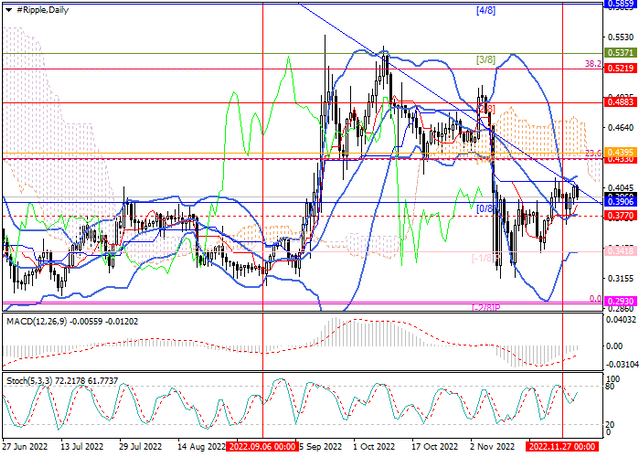 Technical indicators do not give a single signal: the Bollinger Bands are horizontal, the Stochastic reverses upwards, the MACD histogram is stable in the negative zone.

Yesterday at 8:53 AM
Solid ECN