The BTCUSD pair continues to trade within a downtrend, under pressure from the May meeting of the US Federal Reserve on monetary policy.

Last week, the price of "digital gold" attempted to rise to 40000 after the head of the US regulator, Jerome Powell, denied the possibility of accelerating the pace of raising interest rates to 75 basis percentage points, which caused investors to hope for a reduction in the risks of a recession in the national economy and returned interest in risky assets in the short term. However, the decline continued, and by now, the quotes have reached their lows of this January, around 33030.

The fall in the stock market, with which digital assets are actively correlated, also harms the cryptocurrency sector. Several experts believe that investors still perceive BTC and altcoins as risky assets that should be disposed of during instability. 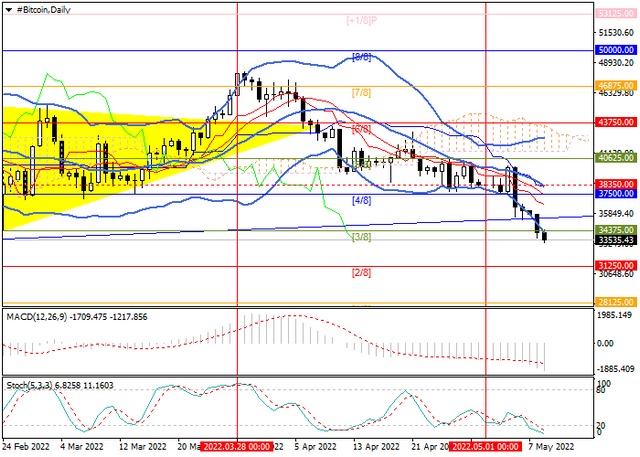 Currently, the price of the BTCUSD pair has fallen below 34375 (Murrey [3/8]) and may continue to decline towards 31250 (Murrey [2/8]). The key "bullish" level is 38350 (the middle line of Bollinger bands), a breakdown of which may lead to the resumption of growth of the trading instrument to 40625 (Murrey [5/8]), 43750 (Murrey [6/8]), however, such an option price movement seems less likely, as technical indicators reflect the continuation of the downward trend: the Bollinger and Stochastic bands are directed downwards, the MACD histogram is increasing in the negative zone.

The ETHUSD pair has been declining since the beginning of last month, and this week has reached 2200 near the January lows.

Currently, the quotes of the digital asset are testing the support zone 2343.75–2300 (Murrey [–1/8], the lower limit of the long-term rising channel), below which they have repeatedly tried to break through earlier. If successful, the decline could continue to 1875 (Murrey [3/8] for W1). Downward reversal of Bollinger Bands and an increase in the MACD histogram in the negative zone signal a continuation of the downtrend. However, Stochastic reversal upwards in the oversold zone does not exclude corrective growth to 2656.25 (Murrey [1/8]) and 2812.5 (Murrey [2/8], average Bollinger bands line) but is unlikely to lead to a reversal of the current trend. 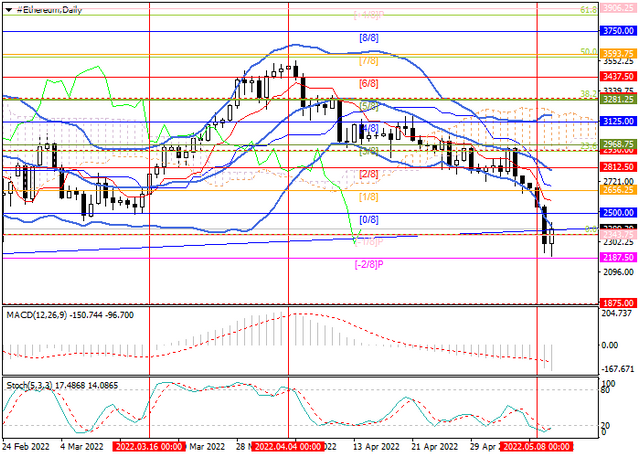 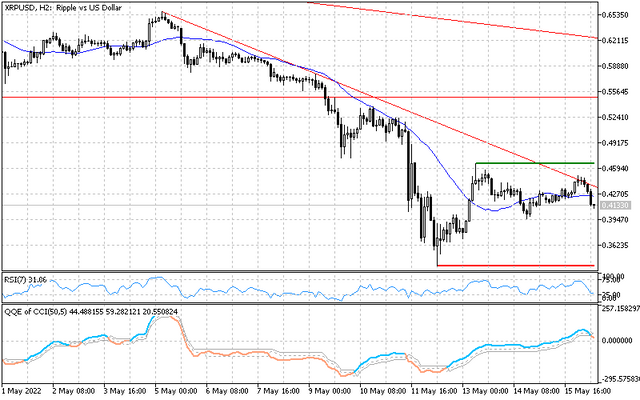 Visit solidecn.com
Trust Pilot Score 4.9
You must log in or register to reply here.

S
The Growth Of Cryptocurrencies In 2022!

S
Why are cryptocurrencies dropping?