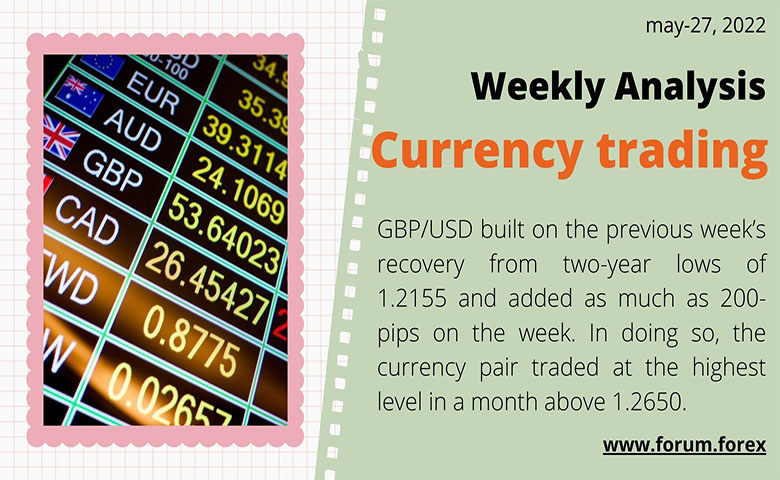 The EURUSD started the US session above the 100 hour moving average after a successful test during the London session stalled the fall (see post here). The price continued the rally to the upside as softer data helped to push the dollar lower. The EURUSD moved up to retest the high price from Tuesday's trade near 1.0748, and the swing area going back to mid to late April between 1.07568 and 1.0760. The high price stalled at 1.0764.

The high price in the in the US session just reached 1.07488 just above the lowest of that area.

However, sellers entered and push the price down into the London 4 PM fixing. The price moved all the way back down to retest its 100 hour moving average at 1.07019. The low price just take to 1.07009.

GBP/USD built on the previous week’s recovery from two-year lows of 1.2155 and added as much as 200-pips on the week. In doing so, the currency pair traded at the highest level in a month above 1.2650.

The Relative Strength Index (RSI) indicator on the daily chart rose to its highest level since late-February on Friday and GBP/USD closed the last six trading days above the 21 DMA, showing that buyers continue to dominate the pair's action.

On the upside, 1.2700 (psychological level) could act as interim resistane ahead of 1.2750, where the Fibonacci 38.2% retracement of the downtrend that started in late March meets the 50 DMA. In case this level turns into support, the next bullish target could be seen at 1.2900 (Fibonacci 50% retracement).

1.2540 (Fibonacci 23.6% retracement) aligns as first support before 1.2440 (21 DMA). A daily close below the latter could be seen as a bearish sign and cause buyers to move to the sidelines. In that case, additional losses toward 1.2300 (static level) could be witnessed.

Moreover, GBPJPY has experienced a sharp decline after peaking at the six-year high of 168.41 in early April. However, the pair has managed to find its feet and is currently trading sideways, while near-term risks seem to be tilted to the upside.

On the flipside, bearish actions could push the price towards the crucial 158.00 support level. Diving beneath that region, the 155.60 barricade, which overlaps with the 200-day simple moving average (SMA), might prove to be the next obstacle for the bears. Failing to halt there, the February low of 150.97 could appear on the radar, a violation of which would set the stage for 148.96.

You Should join this forex traders community, for getting latest forex trading tips and currency market updates.

Elsewhere, USDCAD is extending its retreat from the recorded 17½-month high of 1.3076, heading lower towards the converged simple moving averages (SMAs), which are not now endorsing any sturdy price trend.

To the downside, an initial fortified support section from the 1.2718 barrier until the inside swing low of 1.2646 exists. This includes all the SMAs and the lower Bollinger band and could prove to be a difficult task for sellers to accomplish. However, if this upside defence fails to dismiss selling intentions, the price may then tumble towards the April 21 trough of 1.2457, simultaneously testing the 1.2450 support too. In the event bearish pressures continue to overwhelm, the 1.2402 low and the adjacent 1.2351-1.2386 support band could draw traders’ attention.

On the flipside, if buyers unearth some positive traction somewhere within the 1.2646-1.2718 support zone, resistance could commence from the 1.2762 obstacle before the price jumps to test the resistance region linking the mid-Bollinger band at 1.2865 with the 1.2920 inside swing low.

On the other hand, A combination of a weaker Dollar and recovery in risk assets has underpinned the Australian Dollar in recent sessions with the currency back to 0.7150. This has largely been helped by recent comments from Fed’s Bostic who hinted at the potential of a Fed pause in September, should data permit.

Now while this is noteworthy in the sense that this is the first Fed Official to signal the possibility of a pause, speculation of such action has been mild at best and of course, is very much data dependent. For now, inflation remains sticky and thus the bearish argument for the USD remains muted, the Fed will continue to be hawkish and have little desire to pivot away from this.