The path to becoming a good trader! 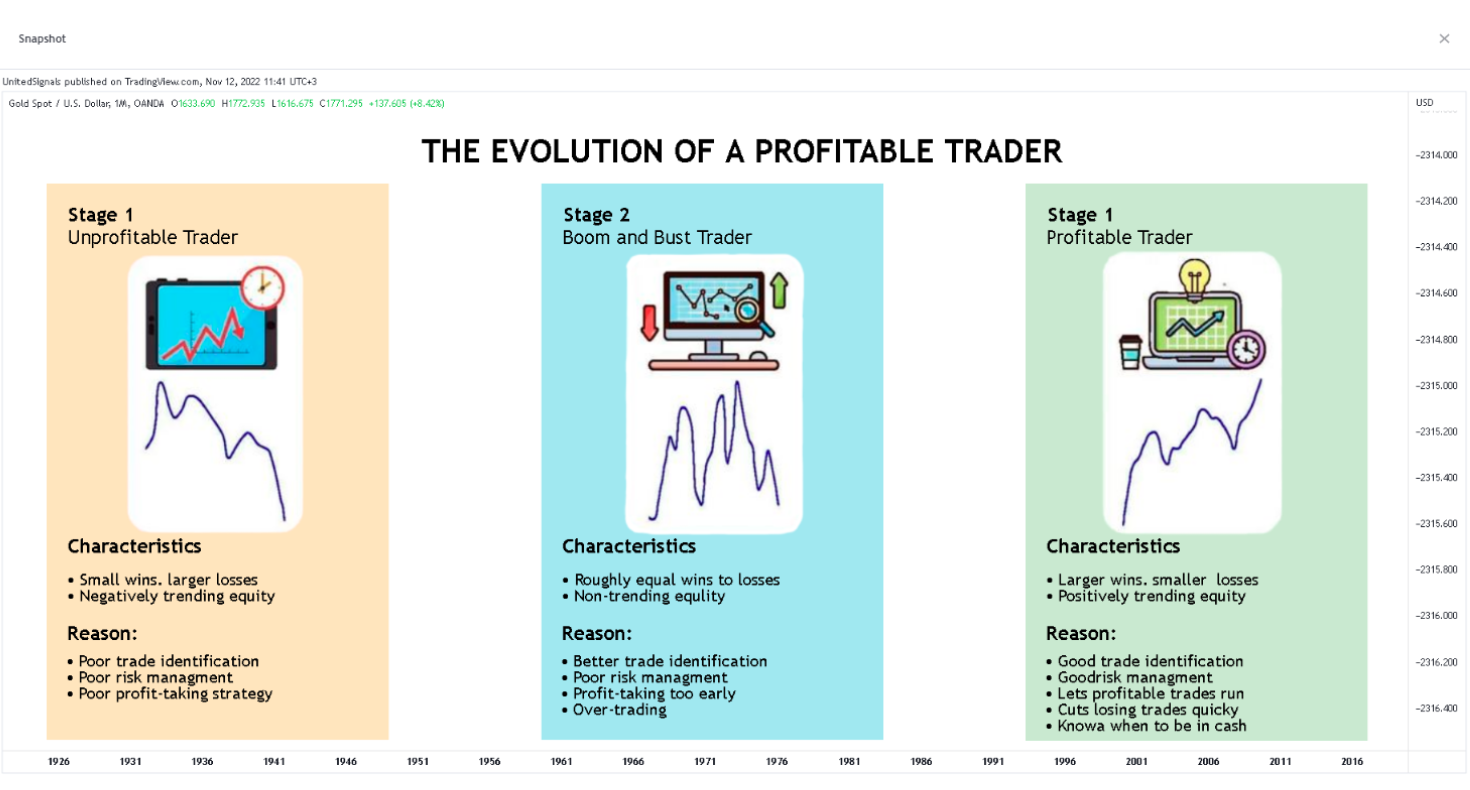 When first learning how to trade, a person goes through a series of mental and emotional stages.

Most traders utilize a version of the "3-stages of competence" model as their primary learning framework.


In this first stage, a trader's lack is blissfully unrecognized. It is at this stage that novice traders will take their first steps toward becoming successful investors by doing things like downloading a trading platform, opening an account, and making their first trades.

But they are swayed by their feelings, and they are easily enticed by the prospect of rapid financial gain.

Traders at this juncture are very likely to experience one of two outcomes:

Instantly, the trades start going against the trader. They haven't had enough exposure to the market to know how to handle it.
Young traders often wipe what they've made in the past and more by taking excessive risks without understanding the fundamentals of risk management.

Successful trading ultimately comes down to the trader's mindset and approach, as witnessed by those who have traded during market booms and busts.

First, the realization that it's futile to try to predict the market's behavior sets in. You learn that making money involves a string of trades, some of which will be winners and some of which will be losers, and that it takes discipline to stick to a system, cut losses short, and let profits run.

At this stage, a trader will start following their system's instructions and entering and exiting the market without question or regard for their own feelings.

When a trader has put in so many hours of practice that they can trade with an almost automatic mindset, they are said to have traded the stage of unconscious competence.

Where exactly are you in your stage right now?
Trade With A Lightning Fast Platform - AssetsFX

I think that focusing on yourself and your skills is much more important that chasing goals surrounding making certain dollar amounts. Self-improvement leads to more money down the road.

Each trader has own story along their trading career when traders have not yet become profitable traders, still need to learn more and hard work to shape their trading style. In forex trading, the most fun time is when withdrawing money into cash and the process smoothly the money arrives without any barrier.
FXOpen Announces Zero Commission on Index CFDs | FXOpen-UK, AU & EU regulation | Contest: Catch zero spread Season 4

Thank you for sharing this, this was a really good and worth reading knowledge

Interesting to hear the Boom and Bust one, I have never heard of them before, but this is a good one worth reading. Thanks for sharing.
G

Becoming a good trader takes time, effort, and dedication. Here are some steps that can help you on your journey: Develop a trading plan, educate yourself, practice on a demo account, continuously monitor and evaluate your performance, and stay up to date with current events and market conditions.

Georgia_Davies said:
Becoming a good trader takes time, effort, and dedication. Here are some steps that can help you on your journey: Develop a trading plan, educate yourself, practice on a demo account, continuously monitor and evaluate your performance, and stay up to date with current events and market conditions.
Click to expand...

S
The Evolution of a Trader | 3 Milestones

S
Why Do Most People Fail At Retail Trading?
2

S
Are you prepared to lose? (and what to do if you are not)

Jan 17, 2023
skrimon
S
S
Do That BEFORE You Start REAL ACCOUNT Trading