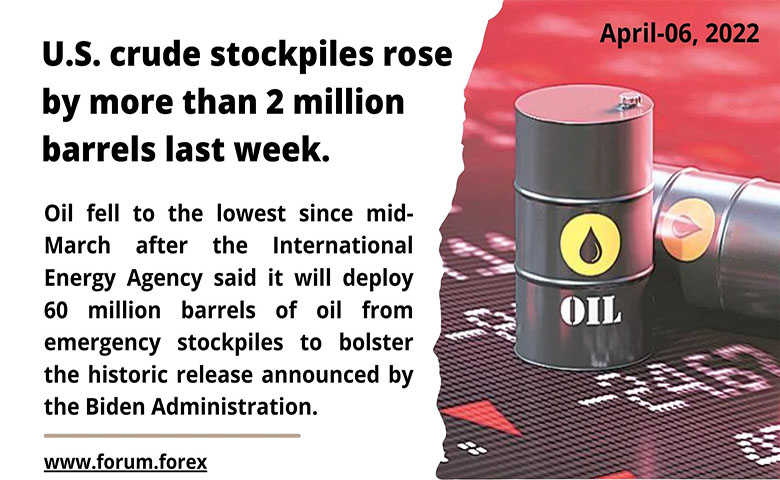 Oil fell to the lowest since mid-March after the International Energy Agency said it will deploy 60 million barrels of oil from emergency stockpiles to bolster the historic release announced by the Biden Administration.​

West Texas Intermediate closed below $97 a barrel after earlier rising as high as $104 on Wednesday. The IEA’s Fatih Birol said members will release 120 million additional barrels of oil, including about 60 million from the U.S. Meanwhile, government data showed U.S. crude stockpiles rose by more than 2 million barrels last week.

Moreover, WTI crude futures tumbled to around $96 per barrel, a dramatic reversal from its daily highs of $104 as investors reacted to news that IEA would release 120 million barrels of oil to cool prices. Pressuring prices further were expectations of weaker demand following a build in US crude stockpiles and an extended lockdown in Shanghai. Still, the prospect of fresh sanctions on Russia raised supply concerns. The US and its allies prepared new sanctions on Moscow over civilian killings in northern Ukraine, with the EU proposing to ban Russian coal and prevent Russian ships from entering EU ports. Britain also urged G7 and NATO countries to agree to a timetable to phase out oil and gas imports from Russia.

Last week it was noted, that “crude oil prices are beginning to consolidate into a symmetrical triangle, which in context of the preceding move higher, would call for a bullish breakout. But in this environment, dominated by spontaneous headlines on the news wire, it may be best of consider the symmetrical triangle a neutral pattern that could yield a breakout in either direction. The apex of the triangle will be reached by the second week of April, meaning a breakout back to the March high above 130 or back to the late-February low (base of the triangle) should occur sometime soon.”

Consistent with this view, a bearish breakout may be getting started. Crude oil prices are trading below triangle support, and bearish momentum is gathering pace with prices below their daily 5-, 8-, 13-, and 21-EMA envelope, which is in bearish sequential order. Daily MACD is on the verge of dropping below its signal line, while daily Slow Stochastics are on the cusp of entering oversold territory. Targets lower include the March 15 low (93.53) and the February 18 low (87.46). Learn more about oil trading at here...

Elsewhere, The FOMC minutes have a knack for making everyone look stupid and that was certainly the case today.

A rout in stocks ensued following some hawkish comments in the report but the move didn't last and eventually reversed. That wasn't nearly enough to erase the day's decline but it was enough to leave both sides feeling uneasy.

You can learn more about forex trading tips and daily Crude oil market analysis at forum.forex

Oman's production of oil and condensate rose 7.3% in January.