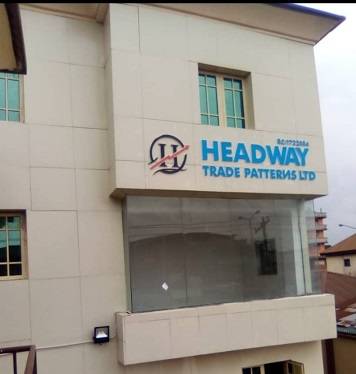 A staff member of the company, Mr Babatunde Akinkurolere disclosed this to SaharaReporters on Monday.

Akinkurolere disclosed that Hakeem had earlier said during a staff meeting that he would travel abroad for a master's programme, and that he later realised that three others were nowhere to be found with their mobile phones switched off.

He revealed that he noticed this when he visited the head office following clients' complaints of not being paid, only to discover that the office had been shut.

He said, “My name is Babatunde Akinkurolere. I’m a Financial Advisor with the company Headway Trade Patterns Limited. They said we are a Forex Trading and Cryptocurrency Trading investment registered company.

“The company also claims to have an office at Rozxy Plaza KM 20, Lekki-Epe Expressway, Ilaje Bus Stop, beside FCMB Bank, Ajah-Lekki, Lagos, and another office at View Point Plaza, No 3 NEPA Road, Opposite Jubilee Bridge, Ajah.

“I was employed in April this year and given an Appointment Letter dated 11th June, 2021 with an ID card.

“In fact, I have a query letter for challenging my female boss, Business Manager, and another member of staff.

“We have been working and paying clients until 20th September 2021, when clients were not paid so, two Business Managers, another staff member and I went to the Head Office to find out what the problem was, only to get there to find out it was locked.

“Mr Olawoyin Hakeem told us in a staff meeting some time ago that he would travel out of the country for his master's. All their phones were switched off. It is obvious that they have absconded with billions of naira of investors and staff funds.”


Akinkurolere added that the Police, the Department of State Services (DSS), and the Economic and Financial Crimes Commission (EFCC) are already on the case.

Speaking with SaharaReporters, one of the defrauded clients, said all the workers in the company, including Akinkurolere were responsible for swindling him.


While he did not disclose the total amount of money he invested in the company, he maintained that all the workers of the company should be held responsible.

“What Mr Babatunde said is true. But, he is also a fraudster. All of them in that company are fraudsters. He is going to pay me every penny I lost to this company because he is the one that markets the product to me. I kept asking him if the product was genuine and he was responding several times that it was genuine. The kind of marketing he put into this makes one fall for it.


"I have invested like four times and got returns until when I invested N1.3 million. So, I demanded a Memorandum of Understanding (MoU) from him, which he promised but did not (deliver). It's so unfortunate," Charles said.


Another victim of the scam residing in the Eti-Osa local government area of Lagos, corroborated the story.
She started investing in the scheme in June.

"I joined in June 2021. I invested N1.1 million only to discover all the people involved have disappeared. Mr Babatunde told us that it has been reported to the police," Mrs Talabi said.

What Disadvantages of Forex do you know ?

As an experienced person, I will say that having no experience in making currency transactions on the stock exchange, it is easy for a beginner to get into the networks of scammers and be deceived; the foreign exchange market has a huge amount of money and players. It is necessary to compete with individuals and financial organizations, commercial banks, national corporations, and hedge funds. Also, expect big risks in the game on the foreign exchange market. They are created by significant leverage and the expected large profit. And before using the next investment offer, it is better to review its review on the website https://www.playlouder.com/acorns-vs-robinhood-vs-webull-vs-m1-finance/. So it will be more likely that you will not be deceived.
M

ye
You must log in or register to reply here.

S
Could Trump Investigation Stop Him From Running In 2024?

Aug 11, 2022
skrimon
S
S
Is There A Green Solution To The Vinyl Record Backlog?