Gold price continues to rise, organized inside new bullish channel that appears on the chart, noticing that stochastic gets rid of its negative momentum gradually, waiting to motivate the price to resume the bullish wave that its next target located at 1900. Therefore, our bullish overview will remain valid and active unless breaking 1820.50 and holding below it. The expected trading range for today is between 1840 support and 1875 resistance.​
Visit solidecn.com
Trust Pilot Score 4.9

Crude oil price succeeded to achieve our main waited target at 73.30 and fluctuates near it, and we believe that the way is open to achieve more decline in the upcoming sessions, to head towards visiting the recently recorded low at 70.30 as a next main target. Therefore, the bearish trend scenario will remain suggested on the intraday and short term basis, supported by the negative pressure formed by the EMA50, noting that breaching 74.20 will push the price to achieve intraday gains that target testing 75.63 before any new attempt to decline. 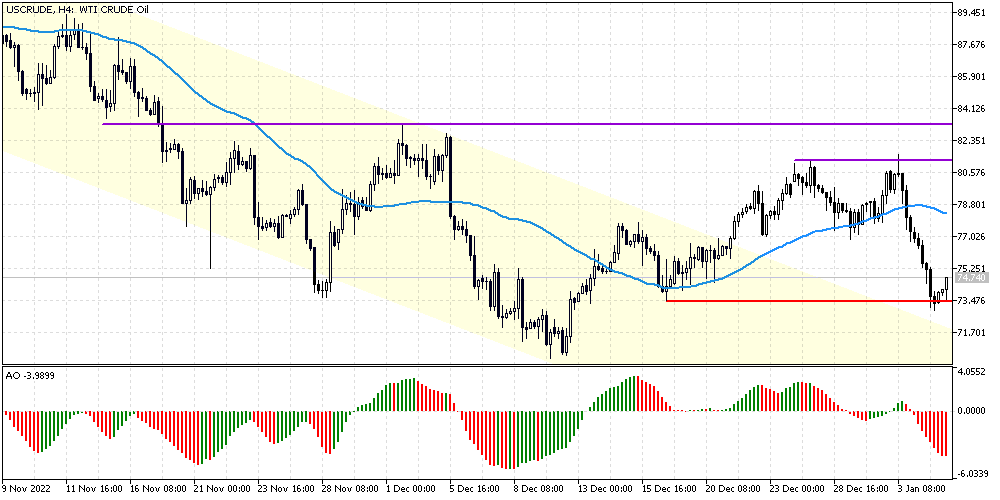 The expected trading range for today is between 71.50 support and 75.00 resistance.​
Visit solidecn.com
Trust Pilot Score 4.9

FOMC minutes released yesterday have been rather hawkish with the document noting that US central bankers do not expect rate cuts in 2023. It also noted that while progress has been made in bringing inflation back under control, more rate hikes are needed although a slower pace may be adequate. Release can be seen as hawkish but no major long-lasting market reaction occurred in the aftermath. This can be reasoned with the fact that FOMC minutes have only repeated what the market has already known and has already been pricing in.

Taking a look at US500 chart at H4 interval, we can see that the index has been struggling to launch a larger move in either direction as of late. US500 has been trading in a 3,800 - 3,920 pts range since mid-December, awaiting catalyst for the next bigger move. While today's ADP employment report at 1:15 pm GMT is unlikely to be such a catalyst, tomorrow's NFP data may be source of elevated volatility.​
Visit solidecn.com
Trust Pilot Score 4.9

Silver price reached few pips away from our waited target at 23.05 and begins to rebound bullishly from there, to hint heading to resume the main bullish trend and achieve gains that start at 23.75 and extend to 24.55. Therefore, the bullish bias will be expected for today, motivated by stochastic current positivity, taking into consideration that breaking 23.05 will stop the positive scenario and press on the price to achieve more bearish correction. The expected trading range for today is between 23.10 support and 24 resistance.​
Visit solidecn.com
Trust Pilot Score 4.9

Crude oil price returns to rise and surpass the minor resistance 74.20, to hint new recovery attempts and head towards potential test to 75.63 as a first positive station, making the bullish trend expected for today, being aware that it is important to monitor the price when reaching the targeted level, as breaching it will lead the price to achieve more gains on the intraday and short term basis. 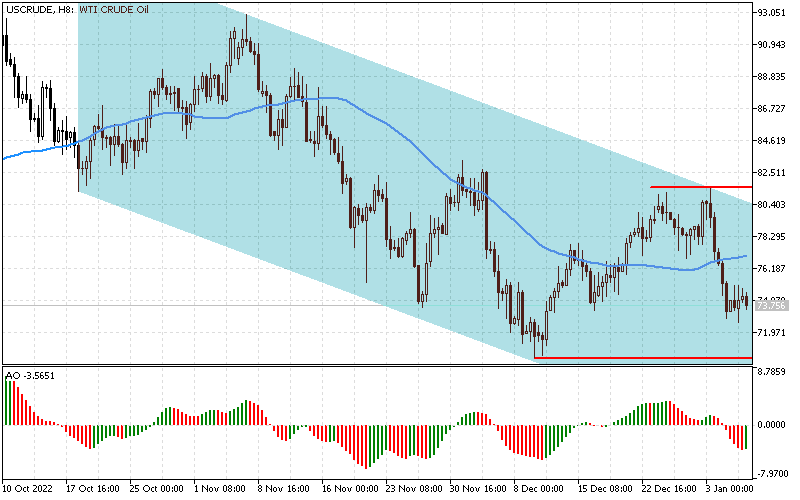 On the other hand, we should note that breaking 73.50 will stop the expected rise and press on the price to resume the bearish trend that its next main target located at 70.30. The expected trading range for today is between 73.00 support and 76.50 resistance.​
Visit solidecn.com
Trust Pilot Score 4.9

BTCUSD - Growth may not last long​

Experts attribute the positive dynamics of the asset to the market reaction to the publication of December data from the US labor market, which reflected signs of a decrease in inflation pressure on the national economy: the growth of average hourly wages slowed down from 0.4% to 0.3% MoM, and from 4.8% to 4.6% YoY, reinforcing investors' hopes for a slowdown in the tightening of the monetary policy of the US Federal Reserve. Traders' enthusiasm may turn out to be short-lived, as the overall national labor market still looks strong: employment rose by 223.0K, exceeding forecasts, while unemployment fell to 3.5%, confirming the threat of further inflationary growth has not been eliminated. Regulator officials note that it is too early to reverse course on the abolition of economic incentives, and interest rates need to be kept at high levels for a long time, and in the long term, the pressure of monetary factors on the digital asset market will continue. 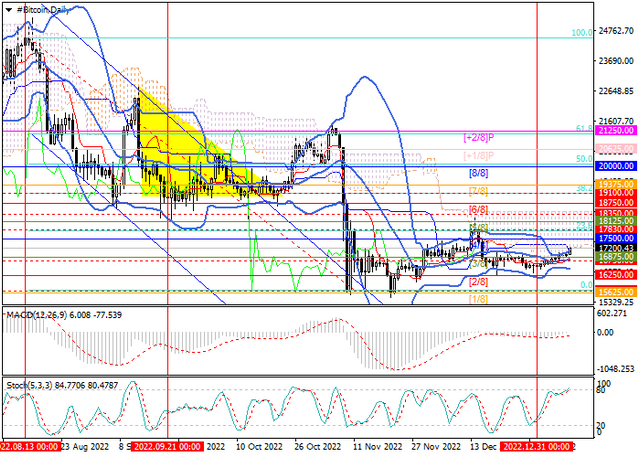 Gold price shows weak trades since morning, affected by stochastic negativity to show some slight bearish bias, and as long as the price is above 1835, our bullish overview will remain valid for today, supported by the EMA50 that keeps carrying the price from below, reminding you that our waited targets begin at 1900 and extend to 1928.6. 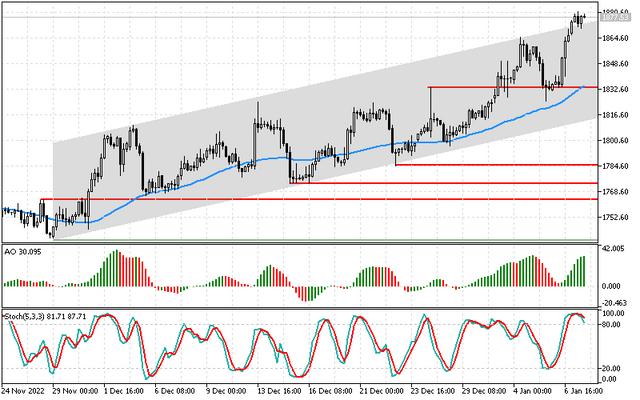 The expected trading range for today is between 1860 support and 1900 resistance.​
Visit solidecn.com
Trust Pilot Score 4.9

Quotes of the index were also supported by the report of the Eurostat, which reflected the slowdown in the dynamics of consumer prices in the eurozone to 9.2% from 10.1% a month earlier. Decreasing inflation at a faster pace could be a signal for the European Central Bank (ECB) to start easing monetary policy, which is of key importance for stock market companies. There is no talk of a complete rejection of the "hawkish" course yet; however, the slowdown in the rate of increase in the interest rate can serve as a driver for strengthening the positions of the DAX 40, which is already being facilitated by the dynamics in the domestic bond market: 10-year bonds lost 0.63%, trading with yield of 2.195%, and long-term 20-year ones lost 0.62%, trading at 2.228%. 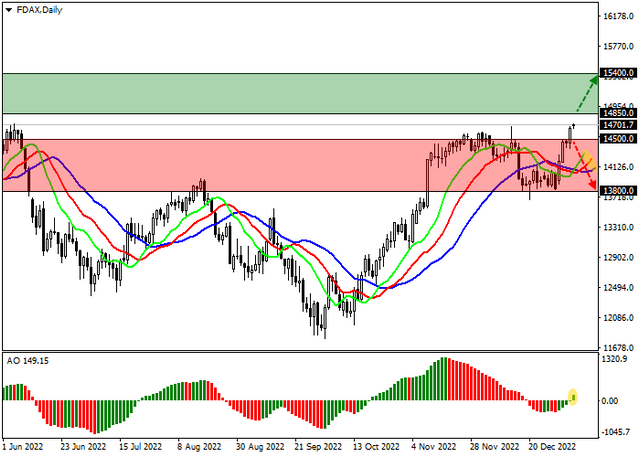 On the daily chart, the price continues to trade in an uptrend, having overcome the local high of the previous year at around 14500.0 the day before.

PayPal - A fall is possible.​

If the assumption is correct, the price of the asset will fall to the area of 50 – 20. In this scenario, critical stop loss level is 90.72. 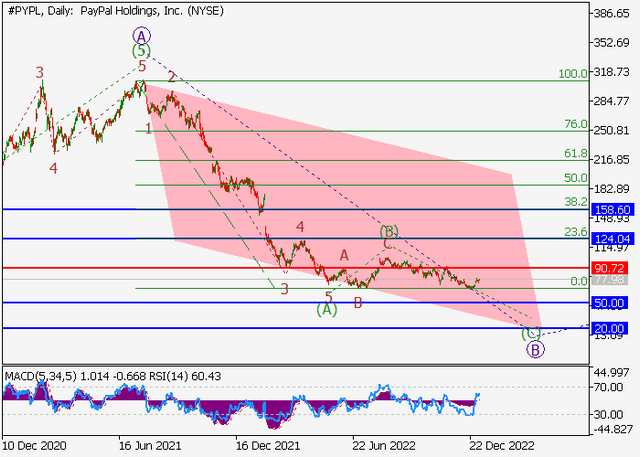 The USDCHF pair managed to achieve our second waited target at 0.9215 and attempts to confirm breaking it, reinforcing the expectations of continuing the domination of the bearish trend, reminding you that our next target reaches 0.9100. 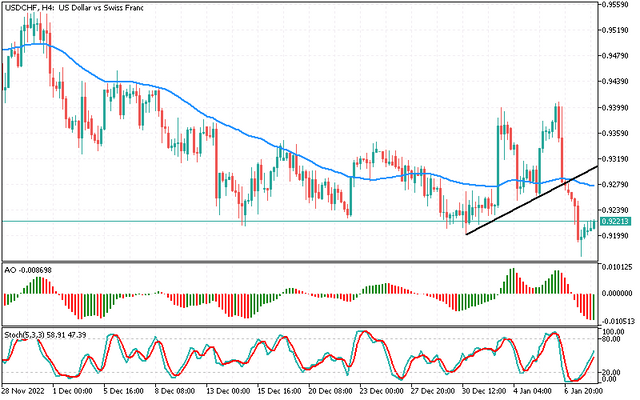 Holding below 0.9265 represents key condition to continue the expected decline, as breaching it will push the price to start recovery attempts and head towards 0.9340 followed by 0.9435 areas as main positive targets. The expected trading range for today is between 0.9140 support and 0.9265 resistance.​ The ETHUSD pair continues to trade in the main sideways range of 1325 - 1090, but this week the price has reached the upper limit and is actively testing it. With a significant consolidation above, the instrument will be able to leave the framework of the long-term descending channel and continue to grow to the levels of 1437.5 (Murray level [7/8], Fibo retracement 61.8%) and 1500 (Murray level [8/8]). 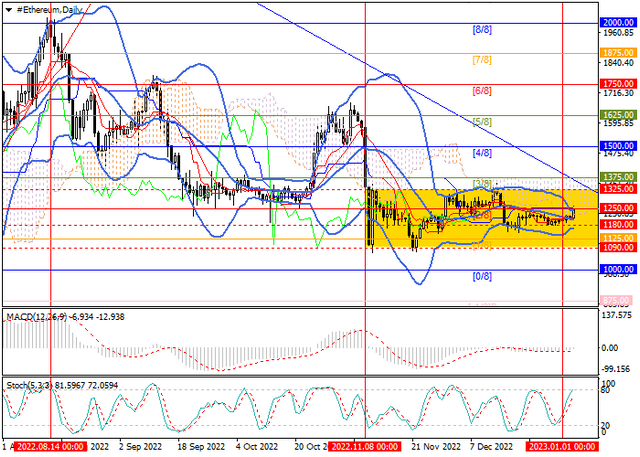 Chart of the Day - GBPUSD​

The British pound climbed to a 3-week high against the US dollar yesterday. The move was driven mostly by USD weakness. However, traders were also offered a speech from BoE Chief Economist Pill yesterday and it showed some changes in the economist's attitude. While Pill had stressed previously that the Bank will act forcefully to bring the inflation back to its target from a 4-decade high, he pointed to easing inflationary pressures yesterday. Pill noted that the labor market is weakening and that should economic slack emerge in-line with BoE's forecasts, the threat of inflation becoming persistent would ease. This was an important insight as it showed that BoE starts to see a turn on the labor market and weakness in the jobs market may be an important argument to reconsider any additional tightening. GBP traders will get to hear from Governor Bailey today at 10:10 am GMT. BoE Governor will moderate a panel discussion on central bank independence organized by Riksbank. GBPUSD may also move in the early afternoon as Fed Chair Powell is set to deliver a speech at 2:00 pm GMT. Powell will also speak on central bank independence.

Taking a look at GBPUSD chart at D1 interval, we can see that the pair has recently bounced off an important support zone in the 1.1880 area. This area is marked with previous price reactions, 200-session moving average and a lower limit of the Overbalance structure. Defending these hurdles, especially the lower limit of the Overbalance structure, hints that pullback started in mid-December 2022 was just a brief correction. A key resistance zone to watch now is 1.2430 area, marked with the previous local high.​
Visit solidecn.com
Trust Pilot Score 4.9

Gold price managed to breach the bullish flag’s resistance and settled above it, to get positive motive that we are waiting to push the price to provide new positive trading that its targets begin at 1900 and extend to 1928.6. 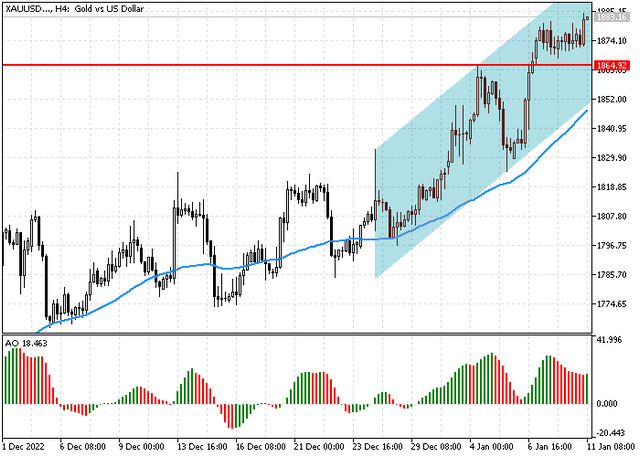 The EMA50 continues to support the price from below, to keep the bullish trend scenario valid and active in the upcoming sessions unless breaking 1865.00 and holding below it. The expected trading range for today is between 1860 support and 1900 resistance.​
Visit solidecn.com
Trust Pilot Score 4.9

Crude oil price tested 75.65 resistance line and bounced bearishly to settle at the key intraday support line that rises now to 74.30, to keep the price stuck between these levels, which keeps our neutrality valid until now, waiting to breach one of the mentioned levels to detect the next targets clearly. 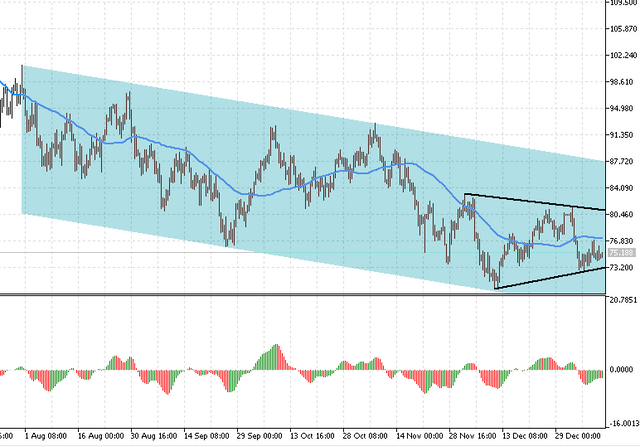 Note that breaking the mentioned support will press on the price to resume the main bearish trend that its targets begin at 72.4 and extend to 70.3, while breaching the resistance will lead the price to achieve new gains that target 76.75 followed by 78.90 as next main stations. The expected trading range for today is between 72.5 support and 76 resistance.​
Visit solidecn.com
Trust Pilot Score 4.9

XRPUSD - Growth as Part of the general market trend​

The positive dynamics of quotes may be associated with the airdrop of the Flare token (FLR) planned two years ago, which since Monday has been distributed among XRP owners in a one-to-one ratio: in total, about 4.28B coins were distributed, the main volume of which will soon was sold. This token is an integral part of a startup that should ensure the interaction of the Ripple ecosystem with other blockchains.

Further prospects for the asset look uncertain, and much depends on the monetary and judicial decisions that will be made soon. In particular, on Thursday, investors expect the publication of December data on US consumer inflation: a slowdown in its growth will give the US Federal Reserve a reason to slow down the pace of monetary policy tightening. Otherwise, the cryptocurrency sector may be under new pressure. Also, XRP may lose ground if the Southern District of New York court, which is considering the US Securities and Exchange Commission (SEC) lawsuit against Ripple, satisfies the regulator's latest petition and recognizes the documents of its former chairman William Hinman as confidential. In this case, the company's lawyers will lose the main argument with which they tried to prove that XRP is not a security, and the case may not be decided in their favor. Shares of Pfizer, the largest US pharmaceutical company, are correcting at 47.

The daily chart shows that the price is declining, consolidating below the 50.0% Fibonacci interim retracement at 48.2. On the four-hour chart, it can be seen that the downward movement may continue if the quotes manage to break the main support — the full correction level of 61.8% Fibonacci 46.60. The already passed intermediate correction level of 50.0% at 48.20 prevents the change of the trend, but so far, such a movement looks unlikely. Crude Oil - The price is in a correction, a fall is possible.​ 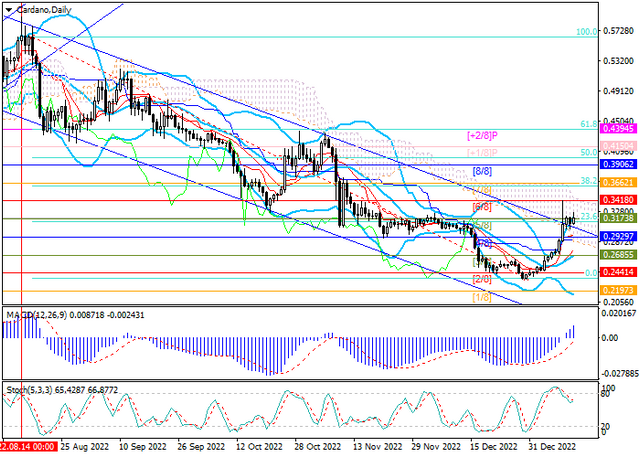 If the assumption is correct, the XAGUSD pair will grow to the area of 26 – 27. In this scenario, critical stop loss level is 23.04. Visit solidecn.com
Trust Pilot Score 4.9
You must log in or register to reply here.