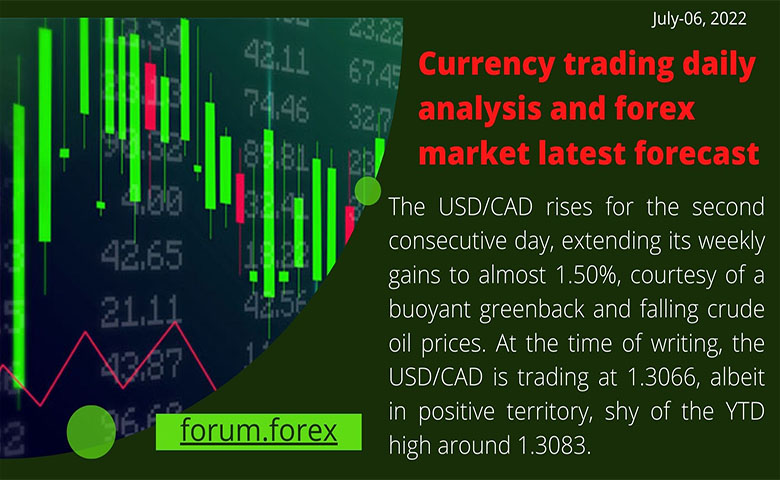 The USD/CAD rises for the second consecutive day, extending its weekly gains to almost 1.50%, courtesy of a buoyant greenback and falling crude oil prices. At the time of writing, the USD/CAD is trading at 1.3066, albeit in positive territory, shy of the YTD high around 1.3083.

Sentiment stays negative as USD/CAD traders prepare to digest June’s Federal Reserve Open Market Committee (FOMC) minutes. During the New York Session, US Services and Composite-related PMIs, released by S&P Global and the Institute for Supply Management (ISM), beat expectations but trailed May’s reading, illustrating that the US economy is slowing down.

On the other hand, The dollar rose to fresh 20-year highs on Wednesday and the euro tumbled to a new two-decade low as rising energy prices and potential shortages cast a long shadow over the euro zone's economy.

The dollar index, which tracks the greenback versus a basket of six currencies, shot above 107, while the euro tumbled below $1.02, both for the first time since December 2002.

The United States is a net energy exporter, while Germany is running a trade deficit for the first time since 1991, he said.

"High interest rates in the U.S. and a trade shift which is beneficial to the U.S. adds to sustainability of the dollar’s strength," he said.

For getting daily latest currency trading analysis and forex trading profitable strategies, you should join this real forex community.

Elsewhere, The EUR/USD pair is trading in the red at 1.0169 at the time of writing. The bias remains bearish after taking out strong downside obstacles and because the Dollar Index tries to resume its growth.

Fundamentally, the Eurozone data came in mixed today. The German Factory Orders rose by 0.1% versus a 0.5% drop expected, while the Retail Sales surged by 0.2% versus 0.4% expected.

Staying below the lower median line and making a new lower low, dropping and closing below the 1.0161 could activate further drop towards the warning line. This scenario could bring short-term selling opportunities.

The rising cost of living continues to squeeze household incomes ahead of Japan’s upper house election on Sunday. A recent poll suggests that while the governing LDP party are likely to secure a majority victory, support for the current prime minister Kishida is waning. Approval ratings for Kishida came in at 54%, down from 59% three weeks ago.

The 4-hour chart shows price action consolidating above 135 while remaining in what appears to be a symmetrical triangle. Such a pattern is inherently neutral – meaning that we could be seeing signs of bullish fatigue in the pair.

The daily chart further supports the view that the market could be at a critical juncture, as the bullish advance appears to be slowing. 134.50 stands in the way of a lower move for now, with 131.35 a really key level for continued downside momentum. Resistance lies at the October 1998 high of 136.89 and 139.26 if we are to reach a new high.

Further weakness in the European currency now drags EUR/GBP to new 3-week lows in the 0.8540 region on Wednesday.

EUR/GBP sheds ground for the third session in a row midweek, heavily influenced by the intense decline in the single currency in response to recession fears in the broader Euroland in combination with noticeable ECB inaction.

Violation of 0.6761/58 pivots is likely to spark fresh bearish acceleration on negative signal and triggering stops parked below, with possible extension towards 0.6463 (Fibo 61.8% / monthly cloud base).

You can learn more about forex trading profitable tips from experts and daily latest currency trading analysis at forum.forex 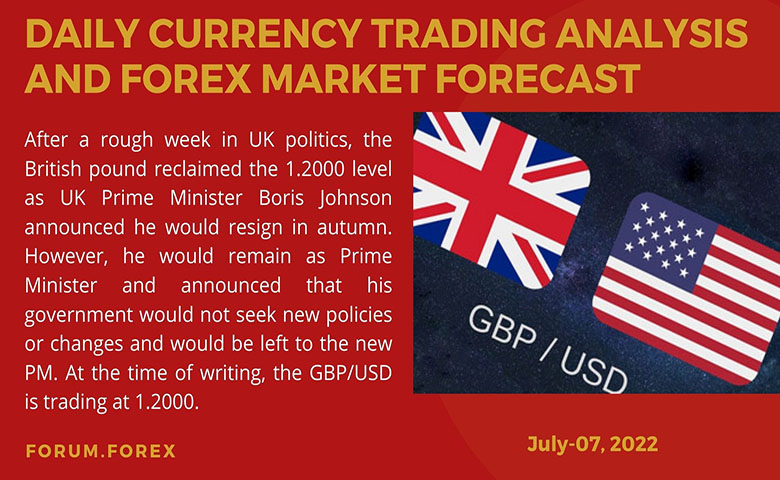 Euro plummeted more than 2.3% against the US Dollar since the start of the week with EUR/USD now approaching downtrend support at fresh 20-year lows. We’re on the lookout for possible price inflection down here for guidance with US Non-Farm Payrolls on tap tomorrow. These are the updated targets and invalidation levels that matter on the EUR/USD technical price charts.

In last month’s Euro Price Outlook we noted that the EUR/USD had, “carved out the weekly / monthly opening-range just below downtrend resistance and the focus is on a breakout in the days ahead.” The range broke just one day later with an outside-day reversal plunging more than 3.5% into the 2016 low / low-day close at 1.0352/85. Euro continued to test this confluence zone into the close of June with a decisive break lower into the start of the week now taking price into downtrend support. While the break does keep the broader downtrend in play, the immediate decline may be vulnerable here and we’re on the lookout for possible inflection off this slope.

As per the pre-Topkyo analysis on Thursday, USD/JPY Price Analysis: Bears step on advances above 136.00, the pair dropped in for a brief spell in the 135.50s before claiming all the way back above 136.00. The bulls have reclaimed the area but for how long?

It was noted that the hourly candle has all of the makings for a strong bearish close with a focus on the 135.50s.

However, following a trip to the downside, the pair has crept higher with a high of 136.22 so far. Thus now begs the question,'' where now?''

It could be argued that a bearish head and shoulders are being formed on the daily chart.

The dollar traded little changed against the euro and other trading currencies on Thursday, though sterling held on to gains after Boris Johnson said he was quitting as British prime minister.

Investors are waiting for U.S. jobs data on Friday and consumer price data next week that should signal the pace of inflation and whether the Federal Reserve continues to aggressively hike interest rates when policymakers meet on July 26-27.

Investors are grappling with the risks of a recession and whether interest rate hikes will be paused as global demand is under pressure.

The Atlanta Fed's GDPNow model estimates seasonally adjusted GDP growth on an annual basis in the second quarter was -2.1%.

For getting daily latest currency trading analysis and forex market forecast, you should join this real forex forum.

After a rough week in UK politics, the British pound reclaimed the 1.2000 level as UK Prime Minister Boris Johnson announced he would resign in autumn. However, he would remain as Prime Minister and announced that his government would not seek new policies or changes and would be left to the new PM. At the time of writing, the GBP/USD is trading at 1.2000.

GBP/USD advances on a soft US dollar, US Initial Jobless Claims rise

US equities remain positive during the day, reflecting recession fears waning and investors’ positive mood. Meanwhile, US Treasury yields rise, and the greenback retracts from 2-year highs, a tailwind for the GBP/USD. The US Dollar Index, a measure of the greenback’s value vs. its peers, has recovered some, up 013%, back above the 107.000 mark.

The Australian dollar was been battered in June and the selling continued in early July as it fell to the worst levels since the peak of the pandemic. However in the last week it has repeatedly found buyers near 0.6765. It flirted with that level four times, including in Asia today.

Now it's sprung to a two-day high at 0.6848 as the mood in markets improves. I'm surprised the bid isn't even stronger given the report that China is considering a $220 billion infrastructure stimulus.

On the other hand, The cross extends a steep fall into third consecutive day and cracks significant support at 0.8501 (top of thick ascending daily Ichimoku cloud). 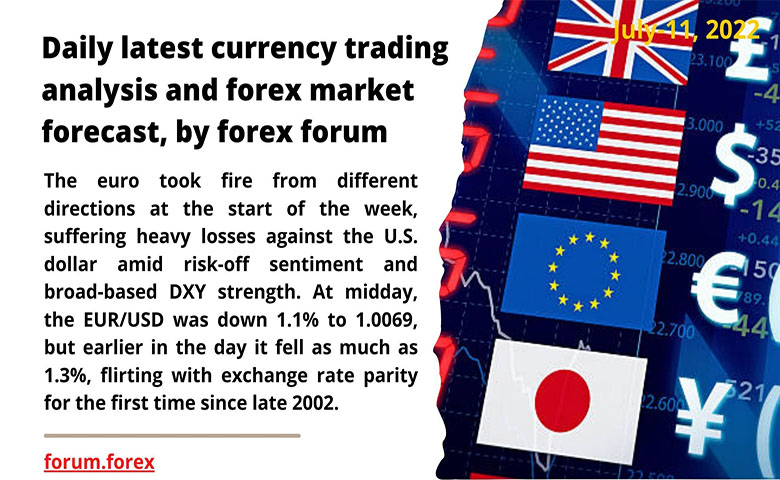 The euro took fire from different directions at the start of the week, suffering heavy losses against the U.S. dollar amid risk-off sentiment and broad-based DXY strength. At midday, the EUR/USD was down 1.1% to 1.0069, but earlier in the day it fell as much as 1.3%, flirting with exchange rate parity for the first time since late 2002.

“The next half of 2022 is unlikely to foster conditions for euro appreciation as the European economy could be in a technical recession. Some of the recent euro weakness can be retraced to the ECB emergency meeting on the 15th of June. The spread between an Italian and German 10y bond had reached 240 basis points, prompting serious discussions. The central bank promised an anti-fragmentation tool to help alleviate supposedly unjustified interest-rate spreads.”

Recently, the GBP/USD pair remained under bearish pressure to challenge the new low around 1.2150 again which was temporarily bypassed few days go. Immediate bullish rejection was expressed around 1.1950 bringing the pair back above 1.2150 again towards higher price levels.

Bullish persistence above 1.2300 (when achieved) will probably enable further bullish continuation towards 1.2550 and probably 1.2650 where further decisions can be taken.

On the other hand, another bearish visits were expected to challenge the price level of 1.1950 when sufficient bearish momentum was expressed.

For getting daily latest currency pairs analysis and forex market forecast, you should join this real forex traders forum.

Last week, we took a look at USD/CAD price action as it continues to act as though it wants to finally get some separation from a range that it has been building for the better part of a year. Since May we have seen sponsorship at increasingly higher levels.

This strengthening of price action around the top of an extended range suggests it is about to break, and the move could be quite explosive. USD/CAD is known for lots of deep retracements and its inability to follow through, but when it does get momentum it can be strong and unrelenting.

A breakout into the 13100s could trigger such a move as the ascending wedge forming since early May gives way to a sustained breakout. ‘Looking to the left’ there isn’t anything meaningful until a swing level created in 2020 in the 13400s.

The USD/CHF advances firmly on Monday amidst traders’ risk-off sentiment, which bolstered the greenback. However, last month’s Swiss National Bank (SNB) sudden shift towards a hawkish posture put a lid on the USD/CHF climb, retreating from daily highs around 0.9840.

The USD/CHF is trading around the 0.9790s region and remains positive in the day, up by 0.33% amidst a risk-aversion trading day.

The USD/CHF shows an upward trajectory, aligned with the USD/CHF higher time-frame (HT), being the daily chart. Nevertheless, the rally stalled around the R2 daily pivot, and subsequent pullbacks should be bought, as the major would continue to the upside. USD/CHF traders should be aware that the Relative Strenght Index (RSI) in this time frame, as the pair rallies and retraces, the RSI’s has been seesawing within the 50-70 boundaries without reaching overbought conditions, meaning the uptrend is solid.

The gold price has been pressured by a resurgence in the greenback at the start of the trading week. The US dollar has torn through last week's highs and had denied the bears in the forex space that were in anticipation of corrections. At the time of writing, DXY, a measure of the US dollar vs. a basket of major currencies is up by over 1% and oscillates around 108 the figure.

Spot gold is moving in on the prior lows, July 8, of $1,729.98. It has made a low of $1,733.92 so far on the day and is currently down by 0.48% at $1,734.09. Sentiment had been brewing, supportive of gold, that the market may have over-estimated the extent to which the Federal Reserve will hike rates this cycle. However, a stronger than expected US June Nonfarm Payrolls report has reinforced expectations for another 75 bp Fed rate hike in July which is giving rise to demand in the greenback at the open before more critical US data this week.

You can learn more about forex trading profitable strategies and daily currency trading analysis at forum.forex

This is an incisive analysis. Thanks for bringing this on
L

Moreover, how do I start learning all the technical terms in Forex? I seriously needed your assistance.
You must log in or register to reply here.