EURUSD - Statistics from the EU prevent further growth of the asset​

The German economy is rapidly plunging into a crisis, and the retail sales volume, which fell into negative territory in June, amounting to –1.6% instead of 1.2% in May, confirms this trend. The indicator has already lost 8.8% YoY, an absolute anti-record in the entire history of observations. Statistics for the euro area show a negative trend: July Manufacturing PMI amounted to 49.8 points, which is lower than 52.1 points in the last month, comparable to the lows of spring 2020. 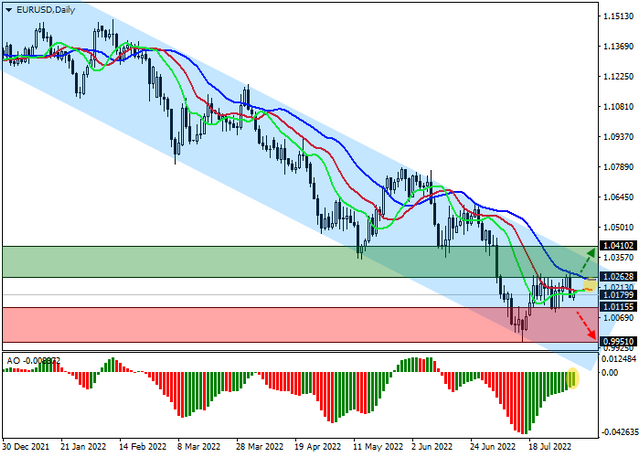 The trading instrument is moving within the global downward channel, heading towards the resistance line.

The USDJPY pair moved to growth as a result of escalating geopolitical tensions between the US and China against the background of the visit of the Speaker of the House of Representatives, Nancy Pelosi, to Taiwan. Now the trading instrument is around 133.16.

Despite serious threats from the PRC, no one interfered with the landing of the official’s plane, but her arrival in the country caused sharp condemnation from the Chinese authorities, who announced the start of large-scale military exercises around the island in response. Pelosi visited Parliament and expressed hope for increased political and economic cooperation with Taipei. In turn, official Beijing reacted by imposing trade sanctions against Taiwan, which is especially dangerous given the current crisis: in particular, the import of citrus fruits and two types of fish products, as well as the supply of sand, will be stopped. In the face of political tension, investors traditionally avoid risky assets and prefer to buy the US dollar and gold. 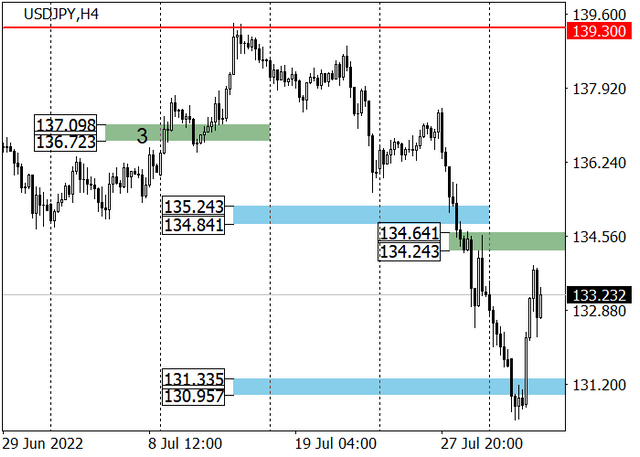 The USDJPY pair rebounded from the key long-term uptrend support at 131.40, and the likely upward target is now the 50% Fibonacci retracement level (134.87) superimposed on July downside momentum. If it is held, the negative dynamics will continue in August, but in case of the breakout, buyers will target 137.18. 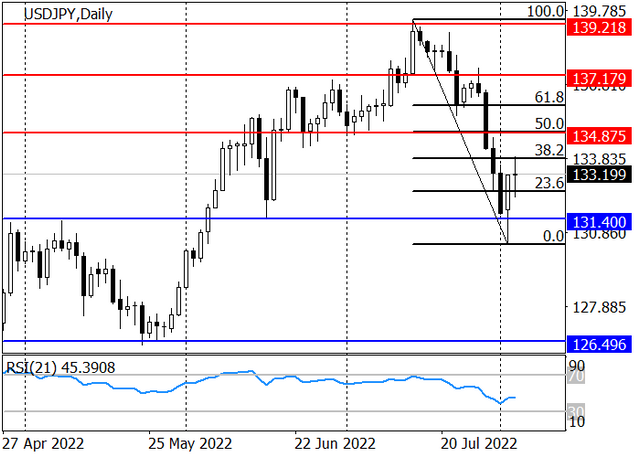 The medium-term trend reversed downwards last week, and as a result of the fall, the target zone 2 (131.33–130.95) was reached, from where an upward correction is now developing, the target of which is to test the key trend resistance 134.64–134.24, after which new short positions can be considered with the target at the low of the current week.

Yesterday, the analysts of the large bank UBS Group published a forecast regarding the prospects for the national currency for the autumn period, suggesting a decrease in quotations to 1.1500. Among the key reasons for the negative dynamics, experts cite high prices for electricity and energy resources amid the escalation of the military conflict in Ukraine, as well as problems in supply chains. Macroeconomic statistics confirm the deterioration of indicators: according to data for July, Composite PMI fell to 52.1 points from 53.7 points in June, and Services PMI corrected to 52.6 points from 54.3 points a month earlier and this is the lowest value since March 2021. 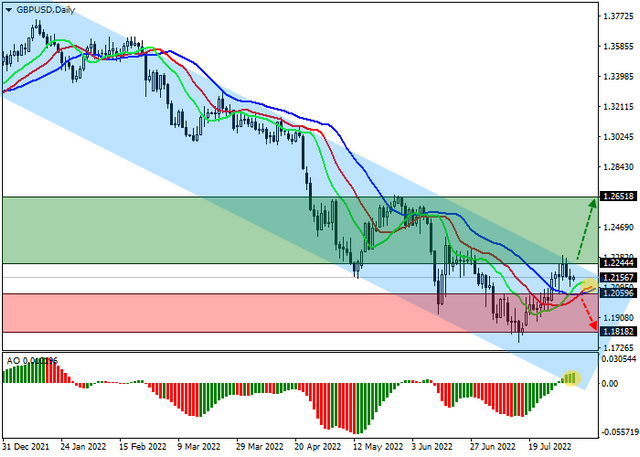 The trading instrument is moving within the global downward channel, coming close to the resistance line.

USDJPY - The pair is in a correction, a fall is possible. 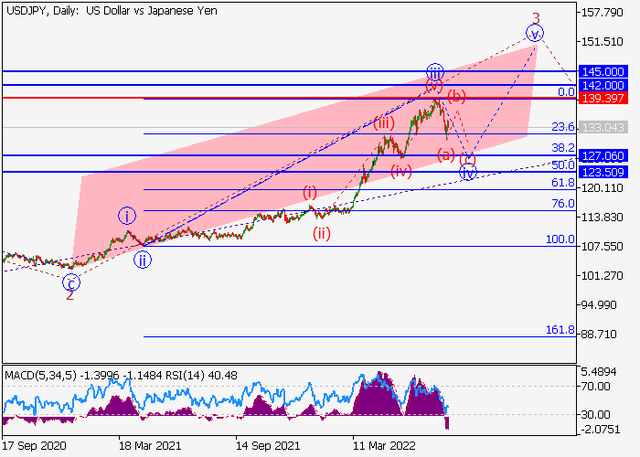 USDJPY - The pair is in a correction, a fall is possible. 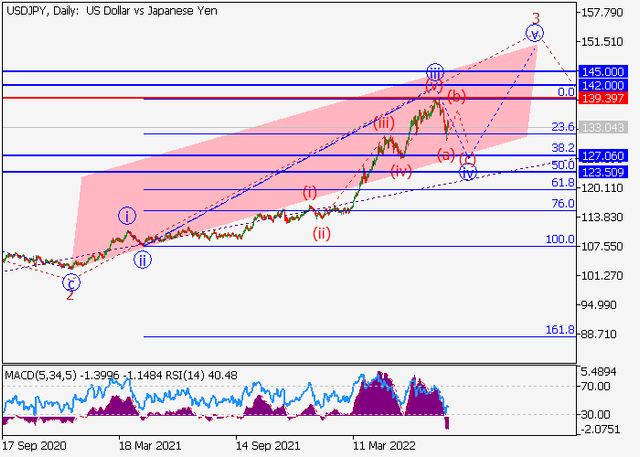 H4
On the four-hour chart, there is the formation of a Three Black Crows candlestick analysis pattern, which means a continuation of the downtrend and emphasizes the unstable position of the "bulls". At the moment, above the support level of 0.9396, a Bearish Engulfing Pattern has formed, which signals about increasing sales volumes. If the "bulls" fail to hold it, one should expect an increased downtrend up to the level of 0.9227. An alternative scenario is possible if buyers overcome the resistance level of 0.9496 with further recovery of positions in the zone of 0.9619–0.9728. 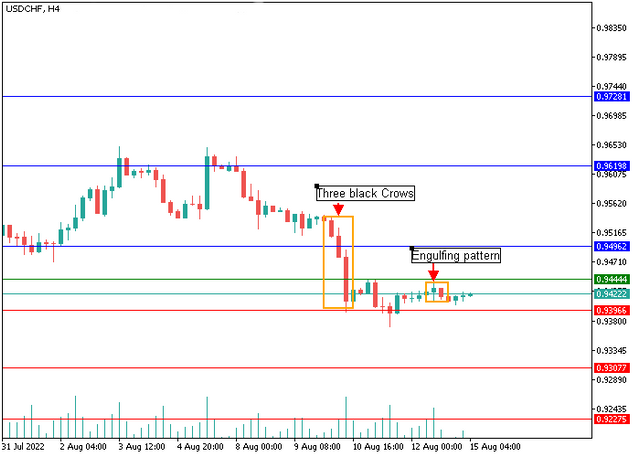 D1
The daily chart shows the formation of a Bear Flag price pattern, from which the price broke down. In addition, the negative trend is accompanied by the formation of a long red candle, the "bearish" Marubozu, which emphasizes the strength of sellers. In the current situation, the "bearish" trend is expected to continue and the price pattern to end at the level of 0.9227. The turning point for the "bulls" may be an impulse breakdown of the level of 0.9496. Despite the EURJPY pair’s trading within the bullish channel, the contradiction between the major indicators and the attempt to fluctuate below 136.60 level will postpone the bullish attack for now, to start suggesting the correctional negative trades that might target 135.50 and 134.40 levels. On the other hand, renewing the bullish attempts requires forming new bullish rally to manage to hold above 137.55 and open the way to target the positive stations near 138.60 and 139.70 levels. On the four-hour chart, at the resistance level of 0.6453, there is the formation of an Evening Doji Star reversal candlestick pattern, as well as a Three Black Crows pattern, which included a Bear Marubozu candlestick. The combination of these figures indicates pressure on the price from sellers and indicates a continuation of the downtrend with the target of 0.6279, overcoming which will allow the "bears" to continue moving to the area of 0.6107–0.5944. An alternative scenario can be realized if the quotes consolidate above 0.6453; then the asset will be able to restore its positions in the range of 0.6598–0.6748. 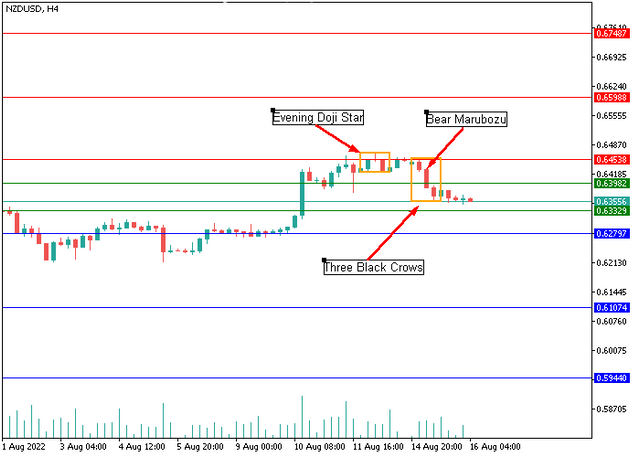 After the uptrend on the daily chart at the level of 0.6453, a Bearish Harami candlestick pattern appeared, which signals an imminent price reversal, and there is also a red long Engulfing reversal candle, warning the "bulls" of the upcoming trend change. In this situation, it is more likely that the quotes will fall to the support level of 0.6279, consolidation below which will allow the "bears" to head to the area of 0.5944. 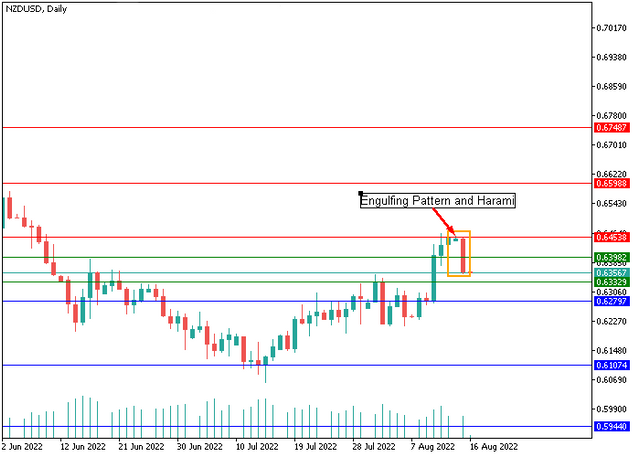 All the money I will earn this summer, at the moment I have already earned quite well, I will spend on surviving in winter. We are all promised the worst winter ever. I plan to find cheap radiators near me and at the same time so that they consume little energy but heat the room well. It will be very difficult to implement at the end of autumn, so I started preparing in the summer.

H4
On the four-hour chart, the quotes of USDJPY are moving in an uptrend channel. After a false breakout of its lower border at the level of 132.54, a Hammer reversal pattern is formed. Next, a Three Advancing White Soldiers pattern was formed, signaling the continuation of the uptrend; however, the emerging Long-Legged Doji pattern warns market participants about the existing uncertainty and signals a possible downward reversal. In this situation, a likely scenario may be a decrease in the quotes of the trading instrument to the support level of 132.54, consolidation of the price below which will allow the "bears" to go lower, to the area of 130.45–126.78. An alternative scenario can be realized if the price consolidates above the resistance level of 135.39. Then the quotes may recover to the range of 136.85 – 139.46. D1
On the daily chart, at the resistance level of 135.39, there is the formation of a Tower Top candlestick analysis pattern, which is formed in the area of high prices and is a downward reversal pattern. At the moment, the price is moving in an uptrend; however, a possible scenario could be that it overcomes the lower border of the trend channel and consolidates below the level of 132.54, which will strengthen the downtrend to the area of 130.45 – 126.78. USDCHF - A fall is possible. H4
On the four-hour chart, a Bullish Flag price pattern is forming, the completion of which is expected above the resistance level of 1.2960, since the breakout of its upper border was carried out by impulsive green candles in the form of a Three Advancing White Soldiers pattern. However, the movement slowed down with the appearance of a Hanging Man reversal candlestick pattern below the level of 1.2960, which is observed in the area of prevailing "bullish" activity. Therefore, to confirm a reversal at the local top, the formation of other "bearish" signals is required. Since the asset continued to grow after the formation of this pattern, one can assume that the quotes will continue their uptrend or consolidation in a narrow range of 1.2900–1.2960. If the "bulls" manage to successfully overcome the level of 1.2960 and consolidate above it, one should expect the quotes to continue moving towards the area of 1.3228–1.3630. An alternative scenario is possible in case of overcoming the support level of 1.2762 by the "bears". Then the negative dynamics may intensify up to the level of 1.2295. 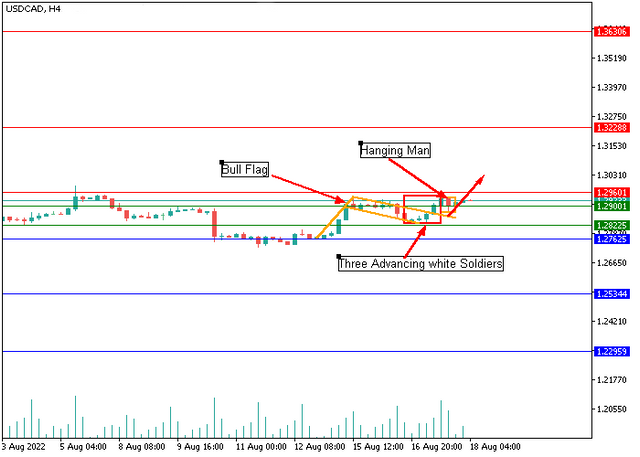 D1
On the daily chart, there is a Falling Wedge price pattern. At the moment, it is clear that the price has broken through its upper limit, but confirmation of this has not yet been received. In addition, at the support level of 1.2762, one of the varieties of the Morning Star candlestick pattern has formed, which indicates the prevailing "bullish" sentiment. In case of successful testing of the broken level and fixing the price above 1.2960, the quotes will most likely go higher, to the area of 1.3228–1.3630. H4
On the four-hour chart, under the resistance level of 0.7030, a Three Black Crows candlestick analysis pattern was formed, after which the trading instrument showed a decrease to the area of 0.6912. In addition, the Bear Marubozu pattern was included in this model, emphasizing the predominance of sellers. Currently, quotes have formed a Hanging Man figure, which in this situation may mean a continuation of the downtrend. A likely scenario is a decline to the support level of 0.6862, overcoming which will allow the "bears" to go lower, to the levels of 0.6680, 0.6420. An alternative scenario can be realized if the "bulls" hold their positions and the quotes recover to the resistance level: a breakout of the key level of 0.7030 will open the way for buyers to the range of 0.7184–0.7400. D1
On the daily chart, under the resistance level of 0.7184, a reversal candlestick pattern Evening Doji Star is observed, after which the asset began to decline down to the level of 0.6912. This pattern is a strong signal to alert traders to declining long positions, giving the "bears" an opportunity to correct the price down. A more likely scenario at the moment is a downtrend towards the key support level of 0.6862. A breakdown of this level will mean the final weakening of the "bulls", which will strengthen the downtrend of the instrument to the zone of 0.6680–0.6420. Before the release of US consumer price index data, the US dollar has been steadily trading around 103.600 on the USD Index, with no significant swings in either direction. The inflation rate is predicted to drop to 8.1% from 8.5% in the previous month, marking the first quarterly drop in inflation in the past few years.
You must log in or register to reply here.