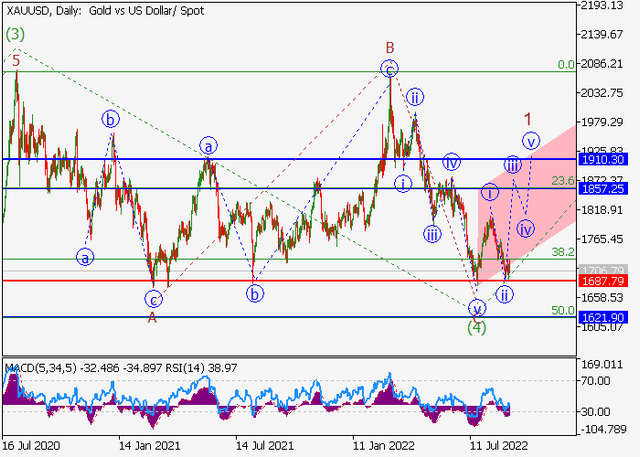 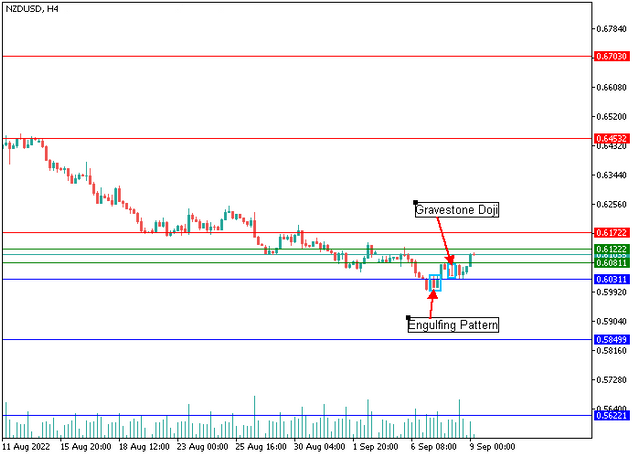 H4
On the four-hour chart, at the support level of 0.6031, there is a formation of a reversal Bullish Engulfing candlestick analysis pattern, signaling a change in the balance of power towards buyers, as well as a Gravestone Doji pattern, which, as a rule, appears at the top and is reversal. It can also be fixed at the base, but for this it is necessary to obtain additional confirmation. In the current situation, the likely scenario is the growth of the asset to the resistance level of 0.6172, overcoming which will allow the "bulls" to head higher to the range of 0.6453–0.6703. An alternative scenario is likely if the "bears" break through the key support level of 0.6031, and the price may drop to the area of 0.5849–0.5622. 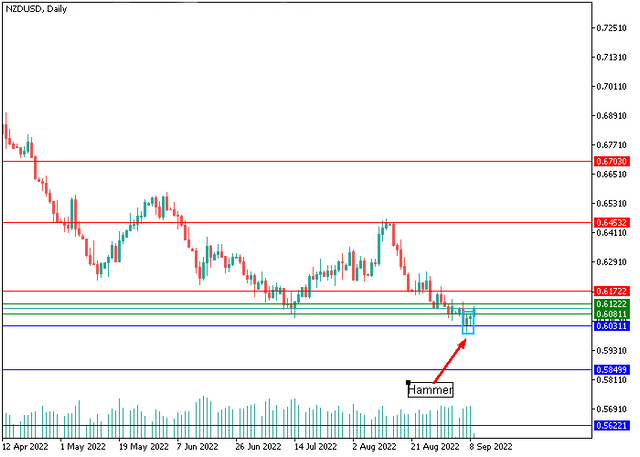 D1
The daily chart shows the formation of two Hammer figures, which are reversal and signal that the price has reached the bottom. In this case, long positions can be opened after overcoming the resistance level of 0.6172, when the "bulls" test it. If the buyers fail to hold the level of 0.6031, the negative dynamics may intensify up to the level of 0.5622.

GBPUSD - The instrument is moving within the global downward channel​

Investors are evaluating the announcement of the new British Prime Minister Liz Truss on the abolition from next month of indexation of electricity bills, which will now not exceed 2.5K pounds a year. She also stated the need to expand the sources of electricity supply through increased oil and gas production in the North Sea. Although households have taken the initiative of the official positively, for the economy as a whole, this may become a new problem since 130 – 150 B pounds annually will need to be allocated to finance such a measure. Some experts suggested that these funds would be raised through government loans, which would then be repaid through gradual tariff increases over two years.

In the UK, national mourning has begun in connection with the death of Queen Elizabeth II. The heir to the throne was her son, Prince Charles of Wales, who will be officially proclaimed King Charles III on September 10. The country may enter a new era of change, and it is not yet known how actively the new monarch will be involved in the state's political affairs. The trading instrument is moving within the global downward channel, reversing towards a local increase. Technical indicators maintain a weakening sell signal: the Alligator indicator's EMA oscillation range narrows slightly, and the histogram of the AO oscillator forms rising bars.

Silver - A fall is possible.​ 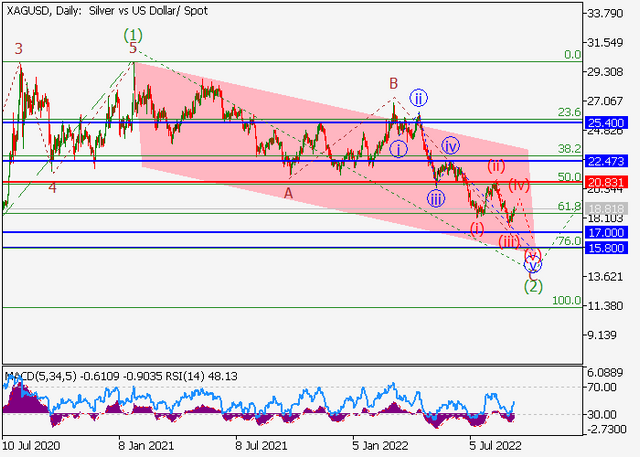 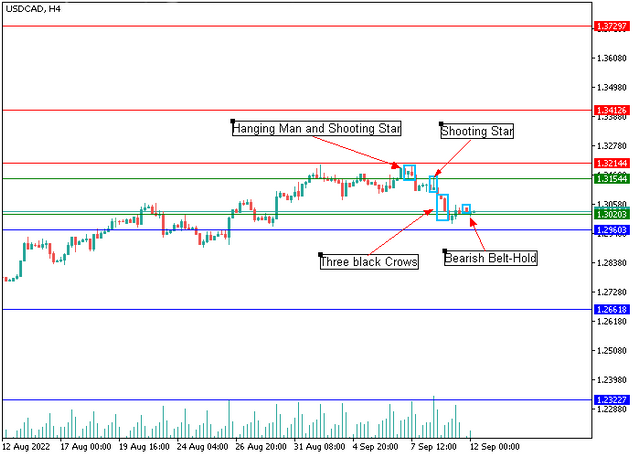 H4
On the four-hour chart, under the resistance level of 1.3214, there is the formation of Hanging man and Shooting star reversal models of candlestick analysis, as well as the appearance of the Three black crows trend continuation pattern at 1.302. At the opening of the trading session, the “bulls” tried unsuccessfully to restore their positions, which is confirmed by the “Bearish” belt hold figure. However, in the current situation, the continuation of the downward dynamics of the asset to the support level of 1.2960 is likely, the breakdown of which allows the “bears” to head lower to the area of 1.2661− 1.2322. If the buyers hold the support level of 1.2960 and the price reverses upwards, the growth to the resistance level of 1.3214 is expected, the breakout of which will become a catalyst for the movement to the area of 1.3412−1.3729. 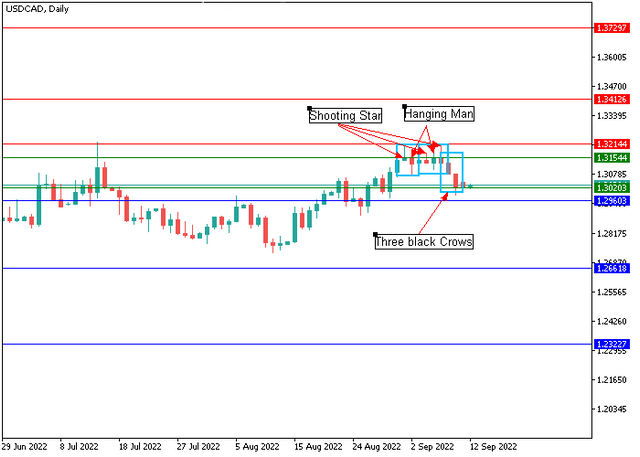 D1
On the daily chart, under the resistance level of 1.3214, a series of Shooting star and Hanging man reversal candlestick patterns are formed, which signal that the price has reached the local high and the market is under the control of the “bears.” Also, the Three black crows downtrend continuation model has formed, and in this situation, most likely, a further decline in the asset in the range of 1.2960–1.2322 is expected. 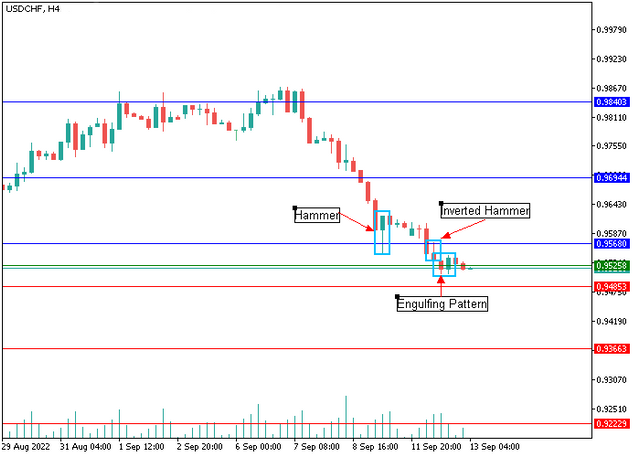 On the four-hour chart, a long-term downtrend is recorded. At the moment, above the level of 0.9568, a "bullish" Hammer pattern is being formed, which signals a likely reversal of quotes, and two more reversal patterns have appeared: the Inverted Hammer and the Bullish Engulfing one. Quotes of the asset are consolidating above the key support level of 0.9485, and the pressure of the "bears" is still visible. However, if the "bulls" manage to stay above this level, then, most likely, it will be possible to observe a small uptrend to the resistance level of 0.9568, after which the correction will take a reversal character, and the price will continue to recover higher to the area of 0.9694–0.9840. If the buyers fail to hold the key support level, one should expect an increase in negative dynamics to the level of 0.9222. 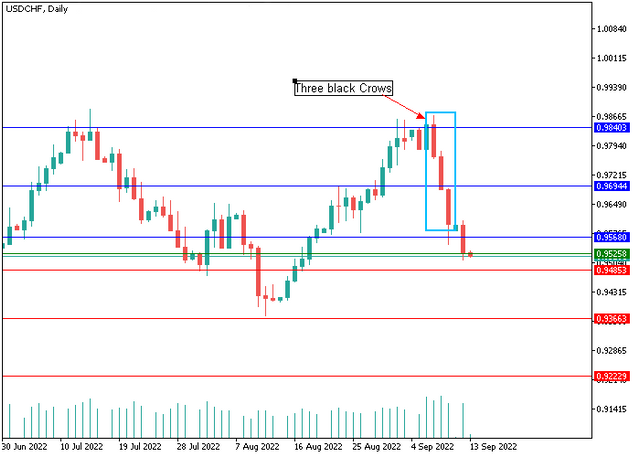 The daily chart shows the formation of the Three Black Crows trend continuation pattern, which indicates strong pressure on the price from sellers. In the current situation, a short upward correction to the level of 0.9568 and a further reversal of the price back to the support level of 0.9485 is possible, the overcoming of which will allow the "bears" to go lower to the range of 0.9366 – 0.9222.

USDCAD - A fall is possible. 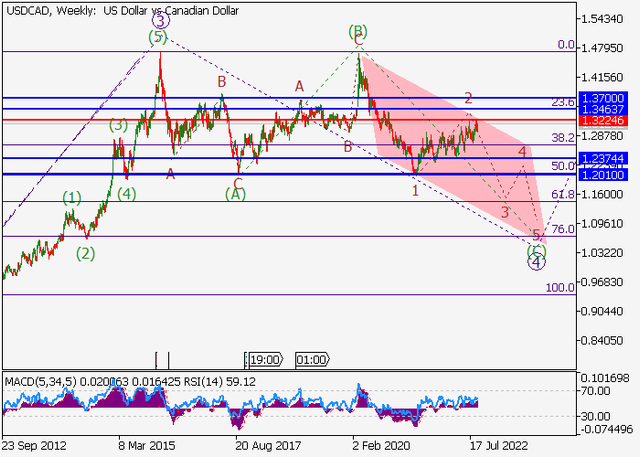 D1
On the daily chart, a Falling Wedge price pattern is forming, and a Hammer pattern has formed above the support level of 0.5963, signaling that the price has bottomed and is ready for a quick reversal. In turn, the Bearish Marubozu pattern, having blocked the previous five-day growth of the asset, warns of a change in market sentiment. In the current situation, a scenario is likely with the recovery of the asset's positions to the resistance level of 0.6073, overcoming which will allow the "bulls" to head higher to the range of 0.6258–0.6528.

USDCHF - A fall is possible. Japanese Finance Minister Shunichi Suzuki announced the regulator's readiness to take decisive steps to stabilize the national currency, not excluding foreign exchange interventions. At the same time, the yen has become more competitive, positively impacting the tourism industry's development, as more and more travelers want to visit Japan due to a significant reduction in the cost of such tours in dollars or euros. Locally, the yen quotes were also supported by statistics on basic orders in engineering, which rose by 5.3% in July, up by 12.8% YoY. 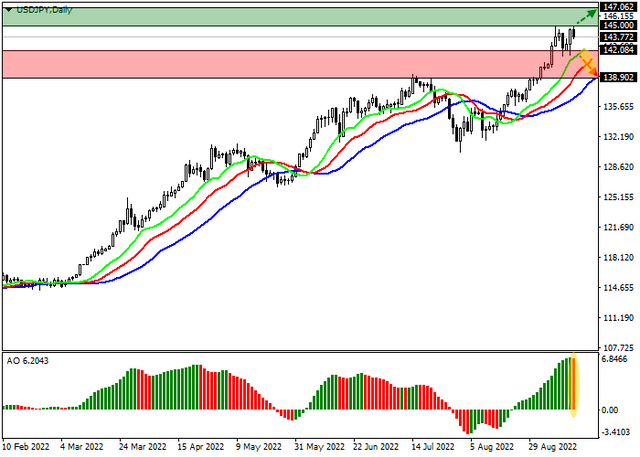 The trading instrument is moving within the global uptrend, having reached the maximum of the year around 145. Technical indicators do not react to local dynamics and keep a stable buy signal: the EMA fluctuation range on the Alligator indicator is directed upwards, and the AO oscillator histogram forms new bars well above the transition level. EURUSD - The US dollar controls the dynamics of the pair​

According to data released yesterday, the volume of Industrial Production in the eurozone in July fell by 2.3% after rising by 1.1% a month earlier, which led to a decrease in the annual rate by 2.4% after increasing by 2.2% in the previous month. The negative dynamics was supported by today's data on the Wholesale Price Index in Germany, which in August added only 0.1 against the forecast of 0.5%, and in annual terms slowed to 18.9% from 19.5%. The EURUSD pair remains within the global descending channel, declining in the direction of the support line. Technical indicators hold the sell signal, somewhat weakening it: the fast EMAs on the alligator indicator are still below the signal line, and the histogram of the AO oscillator forms new bars, being deep in the sales zone.

If the assumption is correct, after the end of the correction, the USDJPY pair will grow to the area of 147.5 – 150. In this scenario, critical stop loss level is 138.32. Switzerland's trade balance will be published tomorrow, which could fall to annual lows of 2.9B francs due to the continued rise in the cost of imports: this figure added 8.6% in August compared to last year's value. The State Secretariat for Economic Affairs (SECO) will publish fresh economic forecasts, which will reflect the situation with inflation, which due to rising import prices, may increase to 3.3–3.5% this month, which is another anti-record for the country. On the daily chart, the price is correcting within the downwards corridor, falling towards the support line. Technical indicators keep a sell signal, which has weakened due to an upward correction: fast EMAs on the Alligator indicator are below the signal line, and the AO oscillator histogram has formed another downward bar in the sell zone.

USDJPY - The pair is in a correction and may grow.​

If the assumption is correct, after the end of the correction, the USDJPY pair will grow within the wave (v) of v to the area of 147 – 150. In this scenario, critical stop loss level is 140. EURUSD - The US dollar controls the dynamics of the pair​

The European currency remains neutral against the backdrop of new negative reports regarding the economic state of the EU. Thus, the Eurostat agency published a study that estimates the price rise for a key food product – bread. In August, its average cost in the EU increased by 18% compared to last year and reached an absolute historical record. Bread prices rose the most in Hungary, by 60% YoY and 10% last month, and the least in France and Belgium, by 10% and 13%, respectively. Thus, food and fuel prices increase, and the inflation rate will continue to rise. The trading instrument is moving within the global downward channel, falling towards the support line. Technical indicators maintain a weakening sell signal: fast EMAs on the Alligator indicator are below the signal line, and the AO oscillator histogram is forming bars in the sell zone. The European currency is showing negative dynamics against its main competitors in anticipation of tomorrow's publication of an extensive block of macroeconomic statistics: analysts predict a decline in business activity indicators for September in almost all leading EU countries. Thus, Composite PMI in Germany may fall to 46.0 points from 46.9 points in August, and Composite PMI in France may fall to 49.8 points from 50.4 points earlier. EU Composite PMI index of business activity in the EU is expected to be 48.2 points, down from 48.9 points in the previous period.

Yesterday, analysts' attention was focused on the US markets. The US dollar renewed the year's high and is currently trading around 111.200 in the USD Index after the country's financial regulator raised its interest rate by 75.0 basis points to 3.25% and provided forecasts for the development of the economic situation. Expectations worsened on all three main indicators: inflation in 2022 is expected at 5.4% from 5.2% previously, unemployment will increase to 3.8% from 3.7% earlier, and economic growth may slow to 0.2% from 1.7% earlier, which most disappointed experts, as the decline in the gross domestic product (GDP) confirms the annual recession. The trading instrument is moving within the global downward channel, falling towards the support line. Technical indicators maintain an increasing sell signal: fast EMAs on the Alligator indicator are moving away from the signal line, and the AO oscillator histogram is forming bars in the sell zone.

NZDUSD - The situation in the New Zealand economy remains difficult

The key driver of the downward movement of quotations is the trade deficit of New Zealand, which in August, for the first time in history, reached –12.280B dollars, falling from –11.970B in the previous period and losing 2.447B dollars on a monthly basis. The main factor behind the negative dynamics is the continued growth in the value of imports, which amounted to 7.93B dollars in August compared to 7.76B dollars earlier. Exports fell to 5.48B dollars from 6.35B dollars earlier. The cost of fuel imports rose the most — by 462.0M dollars or 79%. The trading instrument is moving within the global downtrend, approaching the support line of the downstream channel. Technical indicators maintain a strong sell signal: fast EMAs on the Alligator indicator are below the signal line, and the AO oscillator histogram forms downward bars in the sell zone.