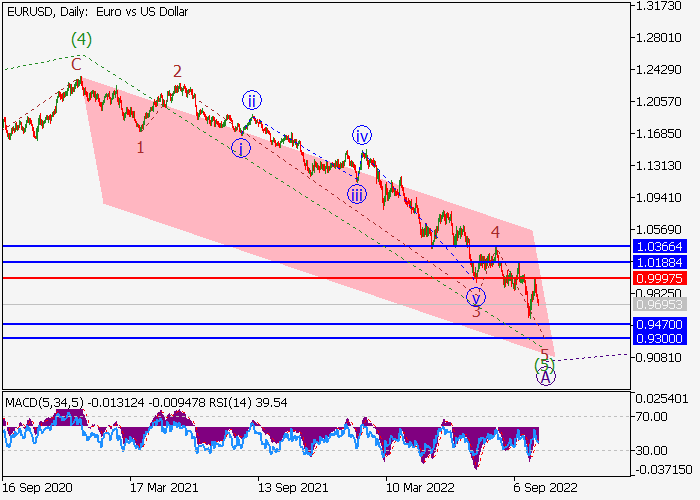 The NZDUSD pair provided more negative trades to touch our second target at 0.5564 and presses negatively on it, in attempt to confirm breaking it now, reinforcing the expectations of extending the bearish wave on the intraday and short-term basis, waiting to test 0.5500 as a next target. 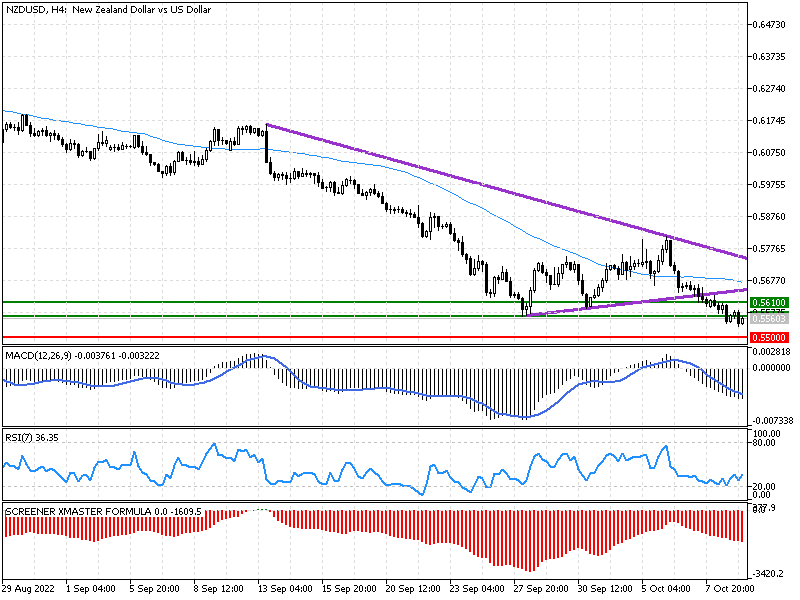 The EMA50 keeps pressing negatively on the price to support the continuation of the expected bearish trend scenario, noting that holding below 0.5610 is important to continue the suggested decline. The expected trading range for today is between 0.5480 support and 0.560 resistance

The USDCAD pair succeeded to touch our waited target at 1.383 now, providing positive trades that support the chances of surpassing this level to head towards achieving more bullish bias in the upcoming sessions, noting that our next target extends to 1.39. 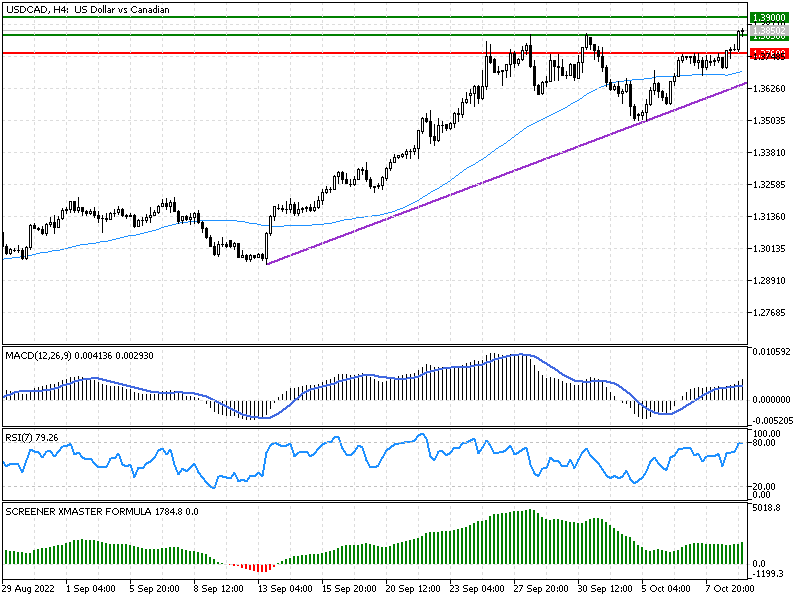 The bullish channel organizes the suggested bullish wave, which will remain valid conditioned by the price stability above 1.376. The expected trading range for today is between 1.376 support and 1.391 resistance. 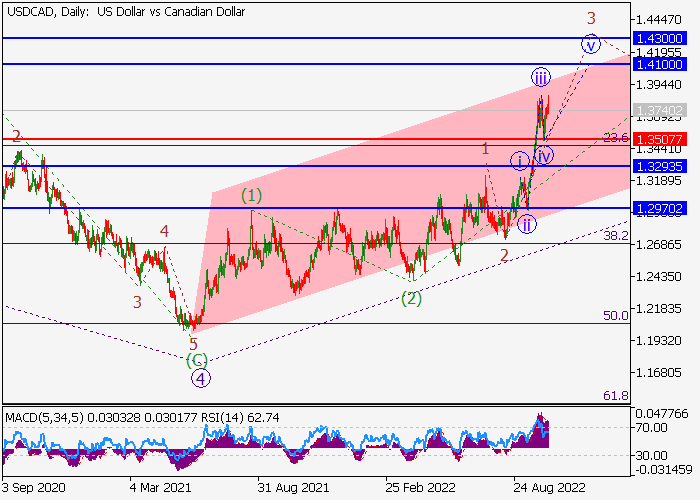 The EURUSD pair bounced downwards clearly after the temporary rise that it witnessed yesterday, as the EMA50 (BOA middle bankd) formed solid resistance barrier against the price, to start pressing on 0.9670 level again, which keeps the bearish trend scenario active on the intraday basis, waiting to visit 0.9630 (Fibo 78.6) followed by 0.9550 levels as next main targets. Stochastic provides negative signal that supports the continuation of the expected decline, which will remain valid conditioned by the price stability below 0.9790. 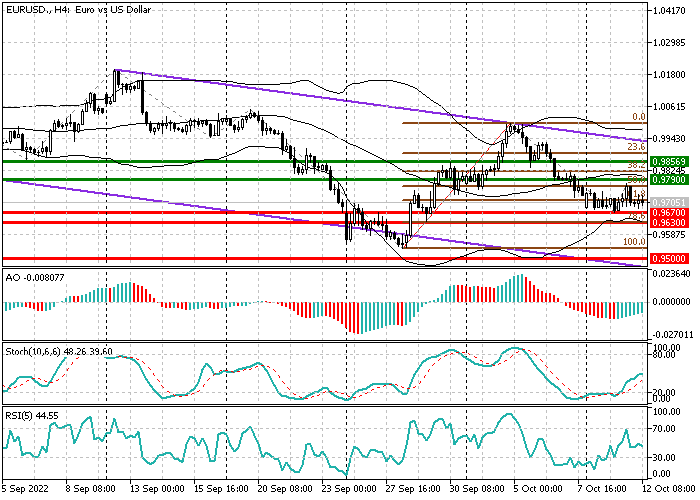 On the daily chart, a downward correction ended as the second wave of the higher level 2, and the formation of the upward third wave 3 started, within which the wave (1) of 3 develops. Now, the fifth wave of the lower level 5 of (1) is forming, and the wave iii of 3 is developing. 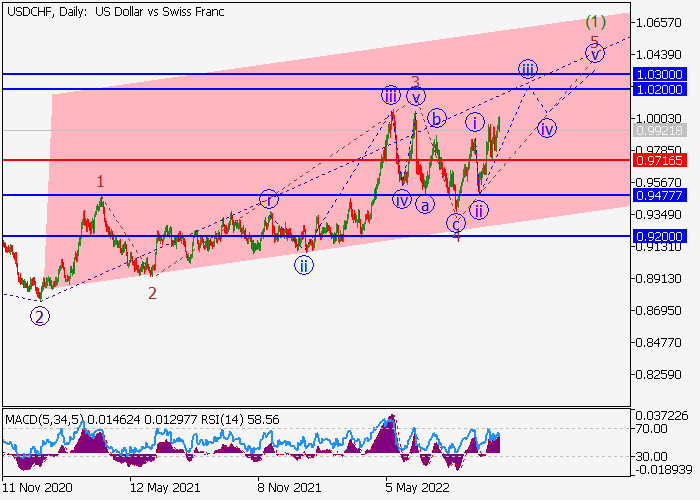 The USDJPY pair opens today’s trading with clear positivity to breach 145.9 level and attempts to hold above it, reinforcing the expectations of continuing the bullish trend on the intraday and short term basis, waiting to visit 147 as a next main target. The EMA50 (BB Middle line) keeps supporting trading inside the bullish channel that appears on the chart, noting that breaking 145.9 and holding below it might press on the price to achieve some temporary bearish correction before any new attempt to rise. 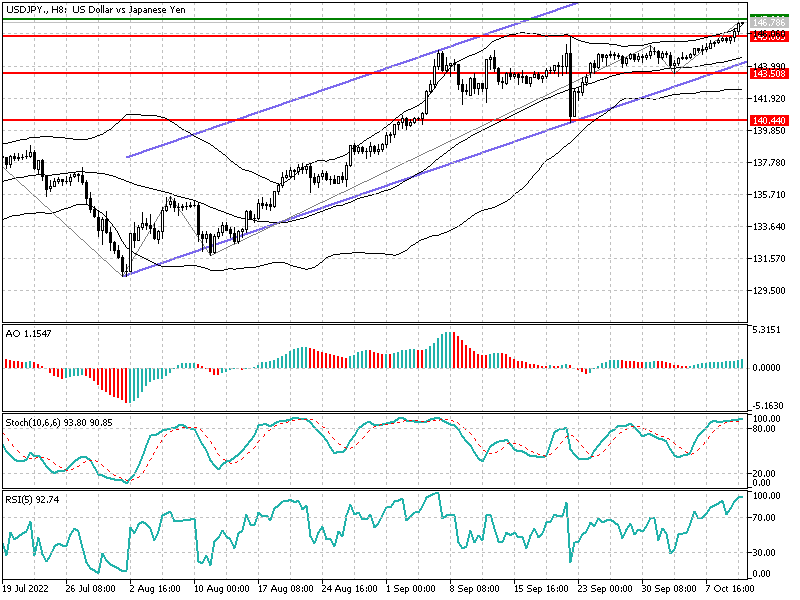 The expected trading range for today is between 145.6 support and 147 resistances. The expected trend for today: Bullish​
Visit solidecn.com
Trust Pilot Score 4.9

The EURUSD pair continues to fluctuate around 0.97 level, and finds difficulty to confirm breaking it, noticing that the price moves inside intraday bearish channel that supports the chances of continuing the expected bearish wave for the upcoming period, which targets 0.963 followed by 0.955 levels as next main stations. 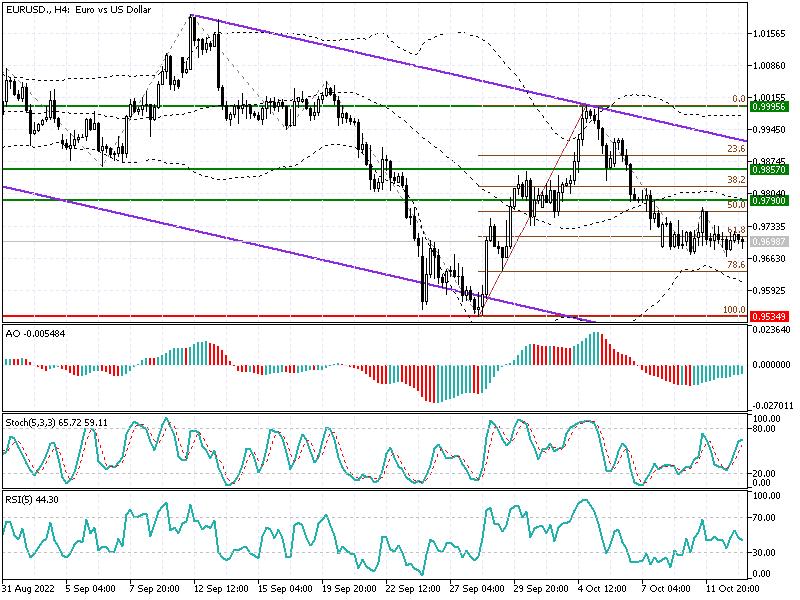 In general, we will continue to suggest the bearish trend unless breaching 0.9790 level and holding above it, noting that stochastic loses its positive momentum now to support the chances of resuming the suggested decline.

The expected trading range for today is between 0.96 support and 0.976 resistance. The expected trend for today: Bearish.​
Visit solidecn.com
Trust Pilot Score 4.9

The USDCAD pair’s recent trades are confined within bullish pennant pattern, thus, breaching 1.3855 will activate the positive effect of this pattern and push the price to resume the main bullish wave, to open the way to rally towards our next main target at 1.3900. 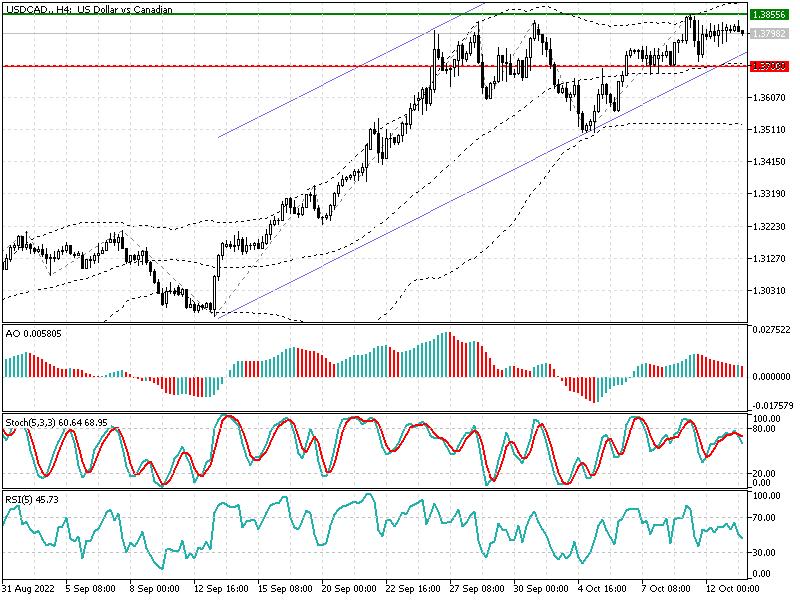 Therefore, the bullish trend scenario will remain valid and active for the upcoming period, supported by the EMA50 (BB Middle band), taking into consideration that the continuation of the bullish wave requires holding above 1.3700. The expected trading range for today is between 1.3760 support and 1.3900 resistance. AUDUSD heads towards the resistance​

The AUDUSD pair approached few pips away from our waited target at 0.6160, and bounced upwards strongly to head towards expected test to the bearish channel’s resistance around 0.6410, making the bullish bias suggested in the upcoming sessions. Surpassing 0.6350 is required to reinforce the expectations of continuing the rise, noting that breaking 0.6275 will stop the suggested bullish bias and press on the price to resume the main bearish trend again. The expected trading range for today is between 0.6275 support and 0.6410 resistance. The expected trend for today: Bullish.​
Visit solidecn.com
Trust Pilot Score 4.9

The GBPUSD pair fluctuates with slight negativity to move below 1.13 level, affected by stochastic negativity, and as long as the price is above 1.118, our bullish overview will remain valid for today, supported by moving above the EMA50, reminding you that we are waiting to visit 1.1495 followed by 1.1710 levels as next main targets. 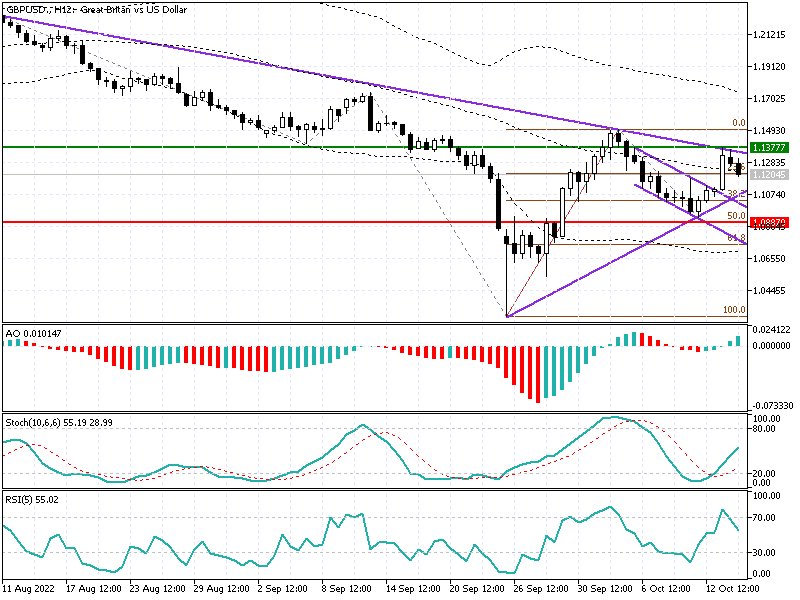 The expected trading range for today is between 1.1230 support and 1.1370 resistance. The expected trend for today: Bullish.​
Visit solidecn.com
Trust Pilot Score 4.9 The AUDUSD pair bounced downwards clearly after approaching the horizontal resistance at 0.6360, to head towards resuming the main bearish trend within the bearish channel that appears on the chart, on its way to visit 0.6165 followed by 0.6090 levels as main negative targets. Note that breaching 0.6270 might push the price to attempt to recover again, to head towards testing 0.6385 areas initially. The expected trading range for today is between 0.6165 support and 0.6280 resistance. The expected trend for today: Bearish.​
Visit solidecn.com
Trust Pilot Score 4.9 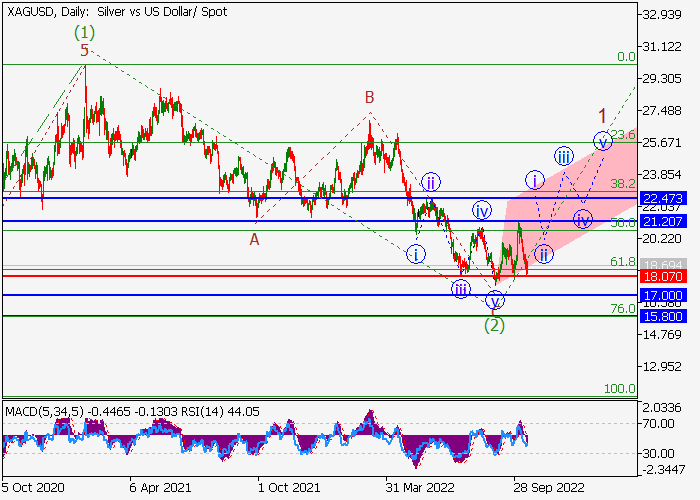 The GBPUSD pair faces negative pressure to attack the bullish channel’s support line and press on the next key support 1.1518, which urges caution from the upcoming trading, as confirming the break will stop the expected positive scenario for today and force the price to start new bearish wave, while the price needs to step above 1.1.1357 again to regain the bullish trend that its next target located at 1.1490. The expected trading range for today is between 1.1230 support and 1.1360 resistance. The expected trend for today: Bullish.​
Visit solidecn.com
Trust Pilot Score 4.9

Today's report on the labor market did not support the Australian currency: unemployment in the country remained at 3.5%, and its growth compared to August was less than 0.1%. The number of unemployed increased by 9.0K to 499.4K people, and their percentage among young people decreased to 7.9%, while the employment-to-population ratio corrected to 64.2% from 64.3% a month earlier. In turn, full-time employment increased by 13.3K people, and part-time employment decreased by 12.4K people, reinforcing the negative trend of previous months, as citizens strive for stable work in the face of rapid inflation and higher interest rates on loans. On the daily chart of the asset, the price is falling within the local channel, holding near the support line. Technical indicators maintain a stable sell signal: fast EMAs on the Alligator indicator are kept significantly from the signal line, and the AO oscillator histogram is deep in the sell zone.

GBPUSD is trading with a multidirectional dynamic, testing the level of 1.1200 for a breakdown. The British currency is still under pressure from the rising US dollar, which is supported by expectations of a tightening of the US Federal Reserve's monetary policy. The Bank of England is also set to further increase the interest rate, given the fact that inflation in the UK in September exceeded the psychological barrier of 10.0%; in addition, the regulator is considering launching a quantitative tightening program. At the same time, the Bank of England is forced to respond not only to economic challenges, but also to the political crisis. The day before, British Prime Minister Liz Truss announced her resignation after only 45 days in office, but the official will continue to fulfill her duties until the elections, which are to be held next week. Analysts call the former Chancellor of the Exchequer Rishi Sunak the most likely candidate for the post of chairman of the Conservative Party and the head of government. In addition, Boris Johnson announced the decision to return to his political career. Truss resigned after being criticized for an initiative to reduce the fiscal burden and subsidize utility bills. Today, investors are watching the publication of a block of macroeconomic statistics from the UK on the dynamics of Retail Sales: on a monthly basis, the indicator slowed down the negative dynamics from -1.6% to -1.4%, and on an annualized basis, on the contrary, strengthened it from -5.4% to -6.9%, while Retail Sales excluding Fuel on a monthly basis corrected from -1.6% to -1.5% with a forecast of -0.3%, and from -5.0% to -6.2% on an annual basis, although analysts expected -4.1%. Weak statistics may push the pound quotes to a new decline.

The GBPUSD pair resumes its negative trades to support the continuation of the bearish trend for the rest of the day, reminding you that our main targets begin at 1.1055 and extend to 1.0920 as next main stations, supported by the negative pressure formed by the EMA50, while the price needs to hold below 1.1290 to continue the expected decline. The expected trading range for today is between 1.1080 support and 1.1220 resistance. The expected trend for today: Bearish.​
Visit solidecn.com
Trust Pilot Score 4.9
You must log in or register to reply here.