GBPUSD - Active decline amid the rhetoric of the British authorities​

The key impact on the dynamics of the asset was made by the report of the new UK Secretary of the Treasury, Kwasi Kwarteng, who announced measures to stabilize the economic situation: also to support the payment of electricity bills, the situation with taxation caused special attention. The official noted that the government is working on a plan for a significant reduction in fees, for the implementation of which it will be necessary to raise an additional 72.0B pounds, and one of the ways the government announced to receive these funds is to reduce the amount of unemployment benefits, due to which the majority of the UK population now lives. After this statement, investors are actively redirecting their capital to other currencies, which may lead to the achievement of parity between the pound and the US dollar soon. 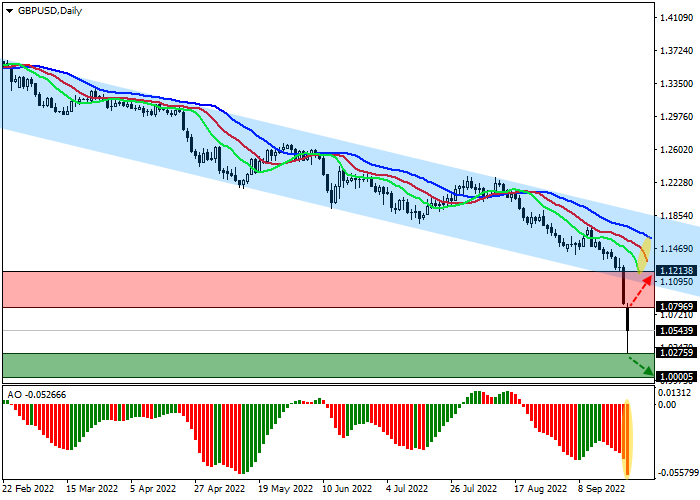 The trading instrument has left the boundaries of a long downward channel and, having broken the support line, is actively declining. Technical indicators maintain an increasing sell signal: the Alligator indicator's EMA oscillation range expands, and the histogram of the AO oscillator forms downward bars.

The Bank of Japan conducted the first foreign exchange intervention since 1998 to support the yen after the decision to keep interest rates at a very low level of –0.10%. Its value is unknown but judging by the movement on the stock exchange, it was a test operation to determine the “depth” of the market, but more serious steps may follow from the financial authorities, which will provoke new pressure on the USD/JPY pair. It is obvious that the key point for making a decision will be 145.00, upon reaching which the officials are likely to approve new interventions. It is quite logical that in the current situation, macroeconomic statistics faded into the background, but this morning, Service PMI in Japan was published, which in September rose to 51.9 points after three months of decline in a row. 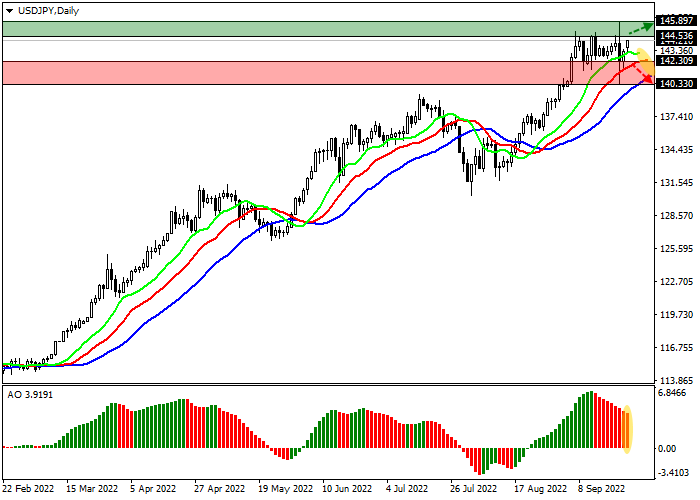 The trading instrument is moving within the global uptrend, holding near the high of the year, around 145.9. Technical indicators keep a stable buy signal: the range of fluctuations of the EMA on the Alligator indicator is directed upwards, and the histogram of the AO oscillator forms bars well above the transition level. 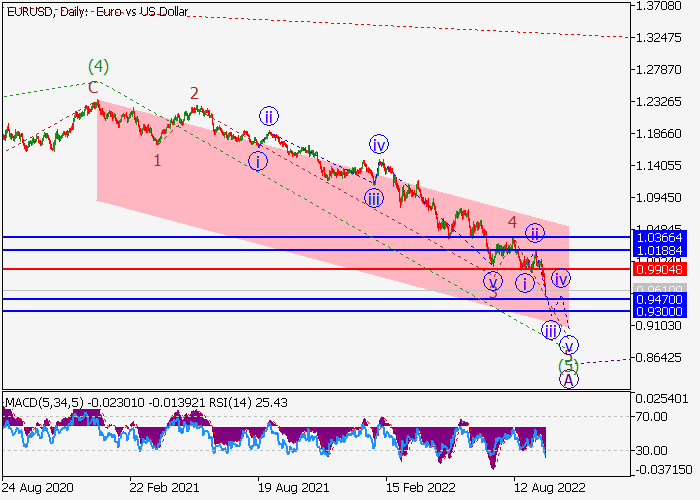 GBPUSD - A fall is possible.​ 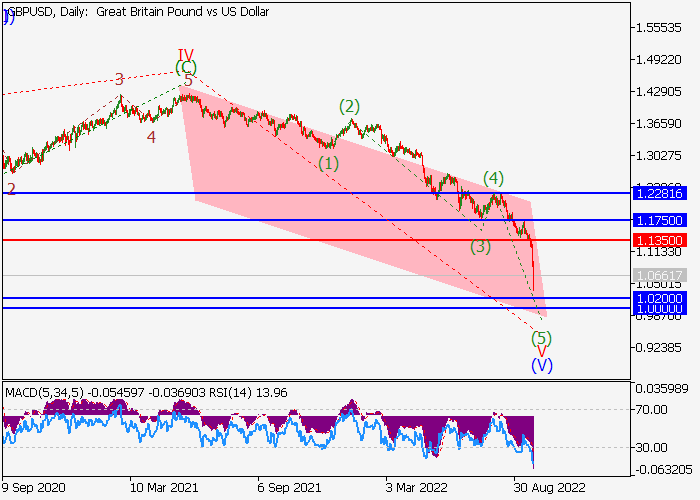 USDCAD - The possibility of growth remains.​ 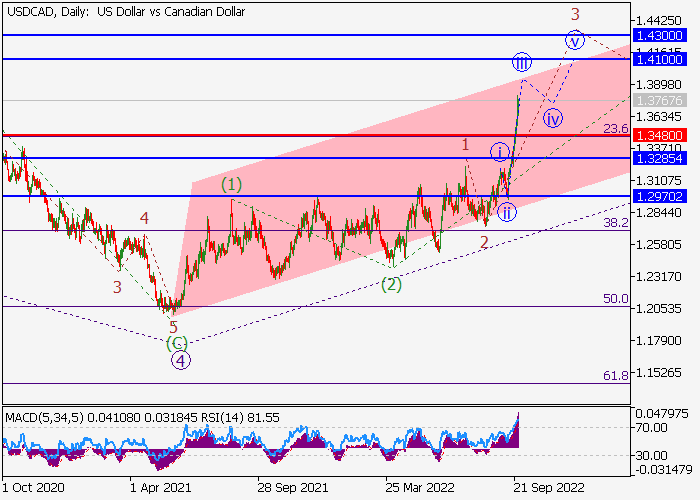 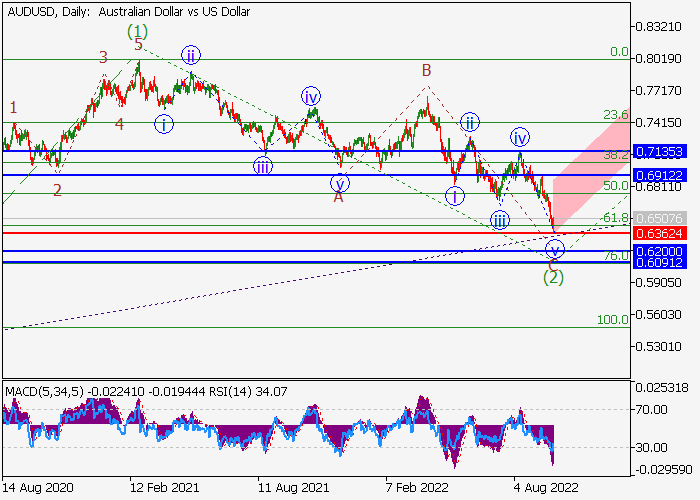 USDCHF - Correction within the side channel​

At the end of last week, the Swiss National Bank lifted the interest rate out of the negative zone. It raised it by 75 basis points, bringing it to 0.5% in response to inflation rising to 3.5%, recorded by statistics in August. Despite the measures taken, the regulator expects that the indicator will remain above 3% until the end of the year and will begin a gradual decline only in 2023. Due to high uncertainty in the global economy, officials have also adjusted their forecasts for GDP growth until the end of the year and now expect the figure to rise by 2% rather than 2.5%, as noted earlier. 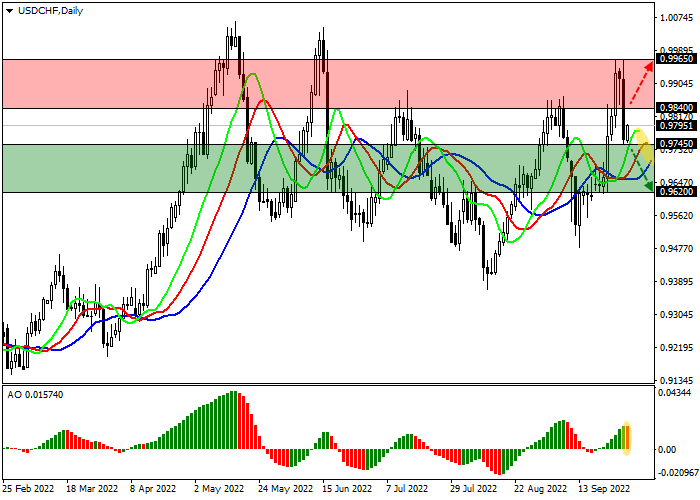 The asset's price is correcting within the lateral corridor, declining towards the lower border on the daily chart. Technical indicators hold a buy signal, which has somewhat weakened due to a downward correction: fast EMAs on the Alligator indicator are above the signal line, and the AO oscillator histogram has formed a down bar in the buying zone. 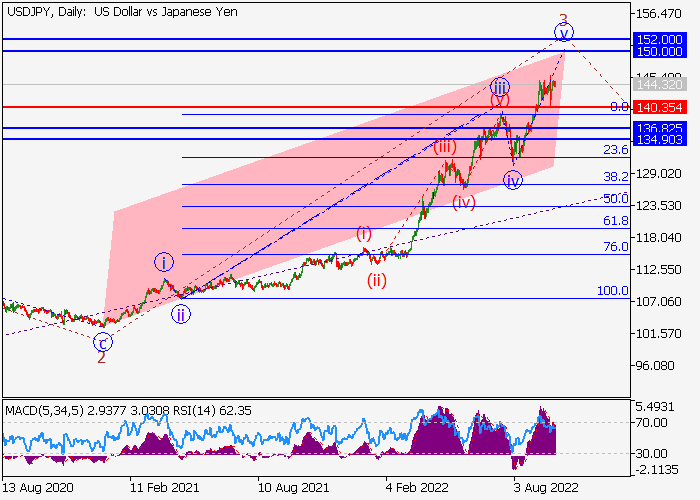 EURUSD - The probability of decline remains.​

On the daily chart, the descending wave of the higher-level A continues, in which the fifth wave (5) of A is formed. At the moment, the fifth wave of the lower level 5 of (5) is developing, which includes the third wave iii of 5 of (5). 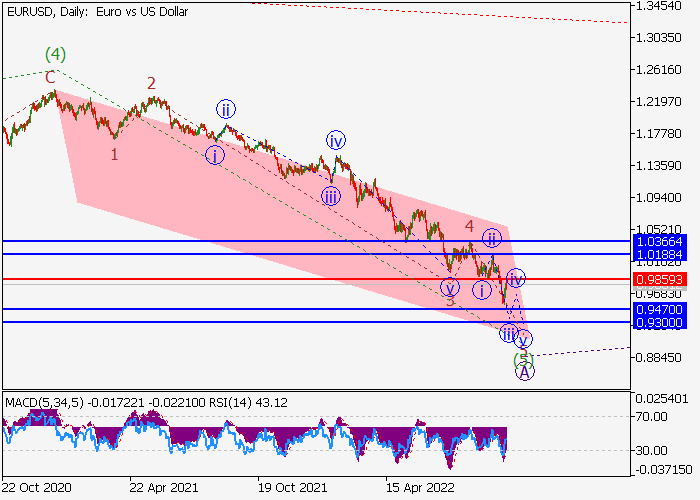 GBPUSD - The probability of decline remains.​

If the assumption is correct, the GBPUSD pair will fall to the area of 1.02 – 1. The level of 1.1731 is critical and stop-loss for this scenario. The long-term trend is downward. As part of the decline, the traders reached a strong support level of 0.6390, and after an unsuccessful attempt to break through it, the AUDUSD pair corrected to the resistance area of 0.6525; however, the "bulls" failed to develop an upward impetus, forming a trading range of 0.6390–0.6525. The decision of the Reserve Bank of Australia on the interest rate, which is expected tomorrow at 05:30 (GMT+2), can take the trading instrument out of this zone. The mid-term trend is downward. Last week the traders broke through the target zone 3 (0.6536–0.6516), and now the area of 0.6336–0.6316 serves as a new reference point for quotes. The key resistance of the trend is shifting to the levels of 0.6561–0.6543. If this resistance is reached within the upward correction, it will be possible to consider new short positions with the first target at last week's low at 0.6368. 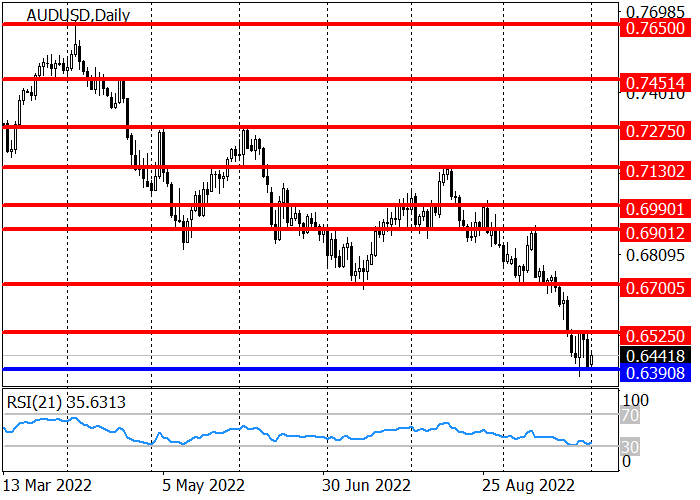 USDJPY - The possibility of growth remains.​ H4
On the four-hour chart, there is a formation of a Double Bottom price pattern, which is reversal and indicates that the asset has reached a local Bottom. In addition, at the key support level of 0.5593, a Morning Star candlestick analysis pattern formed, which also signals that the "bulls" have seized the initiative, and at around 0.5653, a Hammer reversal pattern is formed. To continue the uptrend according to the Double Bottom pattern, the quotes need to test the level of 0.5653, after which, most likely, the asset will continue to recover by impulse movement to the resistance level of 0.5845, overcoming which will mean the retreat of the "bears" from their positions and continued movement to the zone of 0.6149−0.6379. An alternative scenario is possible if the sellers overcome the support level of 0.5593, then the negative dynamics may increase to the area of 0.5348−0.5022. D1
On the daily chart, at the level of 0.5653, there is the formation of a "bullish" Inverted Hammer pattern, which warns market participants about a possible price reversal, and the Hammer and Morning Star candlestick analysis patterns, the combination of which indicates the transition of the initiative to the "bulls". More likely at the moment is a scenario with the continuation of the uptrend to the resistance level of 0.5845, the overcoming of which will allow buyers to head higher in the range of 0.6149−0.6379. AUDUSD - The possibility of growth remains.​

On the daily chart, the first wave of the higher level (1) has completed and a downward correction has formed as wave (2), in which wave C of (2) has appeared. At the moment, the third wave (3) is being formed, in which the entry first wave of the lower level (i) of i of 1 of (3) was formed. The New Zealand dollar shows a moderate increase during the Asian session, testing 0.5800 for a breakout. The NZDUSD pair renews its local highs from September 23 amid reduced activity in the market, as traders are in no hurry to open new trading positions, waiting for the publication of an extensive block of US macroeconomic statistics on the labor market for September and hoping to receive new signals regarding the pace of further tightening of monetary policy by the US Federal Reserve. Meanwhile, the Reserve Bank of New Zealand (RBNZ) held a meeting on Wednesday, following which, as expected, the interest rate was raised by 50 basis points to 3.5%, which was the eighth adjustment of the monetary tightening cycle that started a year ago and the highest rate in the last seven years. According to the RBNZ Governor Adrian Orr, the "hawkish" course allows maintaining price stability and contributes to the most sustainable employment. The market estimates the probability of an interest rate increase by another 50 basis points at the next meeting of the Reserve Bank of New Zealand in November to be more than 60%, and by May the value could reach 4.5%. It is worth noting that the decision of the financial authorities somewhat disappointed the traders, who were counting on the easing of pressure from the leading central banks. The day before, the Reserve Bank of Australia raised interest rates by only 0.25%, while the market expected a correction of 50 basis points. In an accompanying statement, agency officials noted that an increase of 0.25% is necessary to assess the effectiveness of measures already taken to combat inflation. USDCAD - The possibility of growth remains.​

On the daily chart, the ascending fifth wave of the higher level 5 is developing, in which wave (1) of 5 has formed, the correctional wave (2) of 5 has completed and wave (3) of 5 is being built. At the moment, the third wave of the lower level 3 of (3) is being formed, in which wave iii of 3 has completed and a local correction is observed as the fourth wave iv of 3. On the daily chart, the upward wave C is developing, in which the first wave 1 of (1) of C was formed and the downward correction ended as the second wave 2 of (1) of C, where the wave c of 2 has already appeared. At the moment, the development of the third wave 3 of (1) begins, which includes the construction of the first wave of the lower level (i) of i of 3. The single currency noticeably weakened in the second half of last week after the publication of Friday's report on the US labor market, which confirmed the commitment of the US Federal Reserve to the course of further tightening of monetary policy. Thus, in September, 263.0 thousand new jobs were created after 315.0 thousand recorded in the previous month. Analysts had expected growth of the indicator by only 250.0 thousand. At the same time, the Average Hourly Earnings in September maintained a monthly growth rate of 0.3%, but slowed down in annual terms from 5.2% to 5.0%. At the same time, the Unemployment Rate fell from 3.7% to 3.5%, while investors did not expect any changes. Weak macroeconomic statistics from Germany put additional pressure on the instrument. Retail Sales fell 1.3% in August after increasing 1.9% a month earlier, while analysts had expected a decline of 1.0%. In annual terms, the decline in sales accelerated from -2.6% to -4.3%, which turned out to be slightly better than experts' forecasts at the level of -5.1%. Meanwhile, gas reserves in European storage facilities, according to the Gas Infrastructure Europe association, exceeded 90.1%, while warm weather in the region, as well as high wind generation rates, contribute to a decrease in "blue fuel" prices in Europe. The spot gas price at the Dutch gas hub TTF fell to a low of 1.612 thousand dollars. Nevertheless, experts believe that in order to combat the consequences of the energy crisis, the European authorities need to spend more than 1.5 trillion euros additionally, otherwise the decline in GDP could range from 6.5 to 11.5%.

Last week, investors were focused on the publication of economic data from the Federal Bureau of Labor Statistics: Nonfarm Payrolls for September amounted to 263.0K against the forecast of 250.0K. Also, unemployment significantly decreased from the previous 3.7% to 3.5% against expectations of 3.7%, which investors took extremely positively. Following the news release, the Chicago Mercantile Exchange's (CME Group) FedWatch Instrument estimates the likelihood of a 75 basis point hike in November at 77%. Against this background, the AUDUSD pair broke through 0.6390 and is preparing to continue its decline toward 0.6260. The EURUSD pair touched 0.97 level and attempts to break it, reinforcing the expectations of continuing the bearish trend in the upcoming sessions, reminding you that breaking this level will push the price to 0.9550 as a next main station, while the expected decline will remain valid unless the price rallied to breach 0.9790 and hold above it. The expected trading range for today is between 0.9650 support and 0.9800 resistance.

The expected trend for today: Bearish​
Visit solidecn.com
Trust Pilot Score 4.9
You must log in or register to reply here.